‘Back healthy,’ Benito Jones out to help with Ole Miss’ top priority 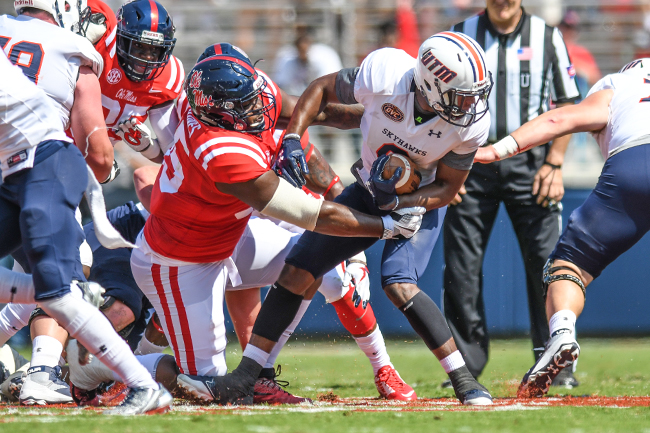 Benito Jones isn’t interested in making an excuse even if he’s got a legitimate one.

Ole Miss’ nose tackle was supposed to be an anchor in the middle of the Rebels’ defensive line last season, but a torn labrum in his shoulder limited Jones’ effectiveness. With the inability to use the normal amount of force to engage offensive linemen and shed blocks, Jones finished with just 29 tackles in 10 starts — 10 fewer tackles than his freshman season when he made just four starts — as the Rebels plummeted to 123rd nationally in run defense.

Jones was held out of spring practice in order to rehab his shoulder and said he’s gone through preseason camp with “no pain.” For Jones, who was also briefly hospitalized before last season after delivering a hit that left him with a concussion, heading into a season with a clean bill of health is refreshing.

“I think I’ve had a decent (camp),” he said. “I didn’t play at all during the spring, and I’m just getting back right with my shoulder. I’m back healthy.”

Jones is in line to begin his second season as the full-time starter at nose tackle when the Rebels open against Texas Tech at Houston’s NRG Stadium on Sept. 1, though the former blue-chip recruit is being pushed by senior Ross Donelly. Both have been running with the first-team defense in recent weeks as the competition to take the first snap alongside Josiah Coatney continues to play out.

Regardless who that ends up being, Jones will be a significant part of the rotation as Ole Miss tries to improve a defense that allowed more than 245 yards a game on the ground a year ago. Jones still flashed his unusually quick first step for a 6-foot-2, 315-pounder at times last season by recording 7.5 tackles for loss, but Jones is looking at all the competition up front as a good thing with the Rebels needing as many fresh, capable bodies as possible to help with their No. 1 objective.

“Just keeping everybody healthy. Getting young guys reps but still keep putting the old guys on the field. Just keep a good rotation to see what we’ve got and see who can play.”