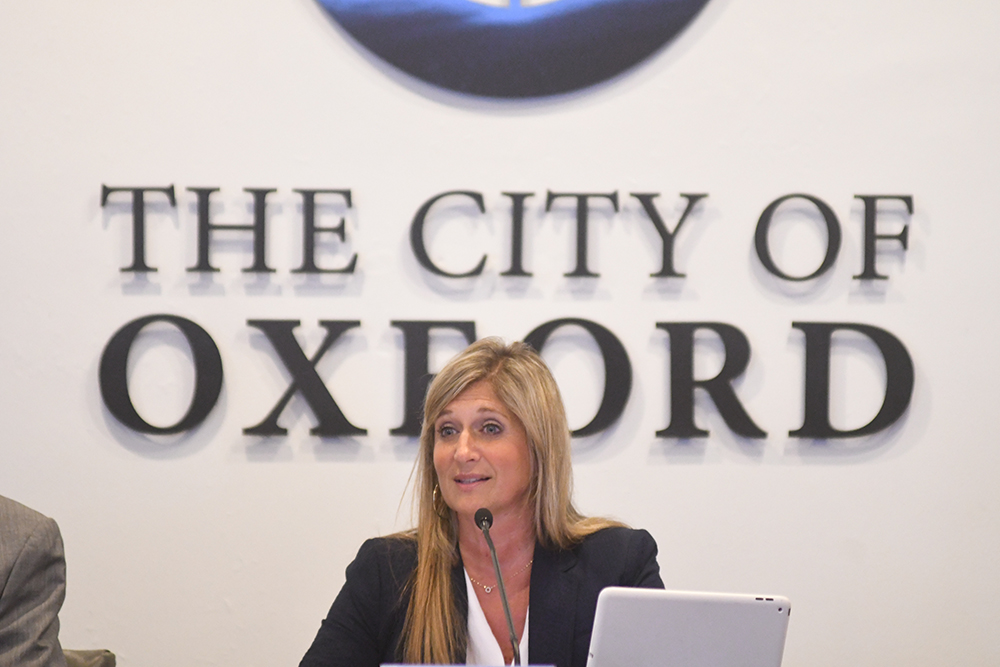 Mayor Robyn Tannehill speaks at the Board of Aldermen meeting at City Hall in Oxford, Miss. on Tuesday, August 21, 2018.

After receiving a letter from the American Civil Liberties Union’s Mississippi office in opposition to the City’s proposed alcohol safety ordinance, Oxford Mayor Robyn Tannehill said the organization seemed ill-informed on more than a few points.

The first point of contention with the letter, which was signed by ACLU of Mississippi legal director Joshua F. Tom and ACLU of Mississippi staff attorney Landon Thames, concerned the idea that the chief of police or any public official would be able to allow or disallow any event taking place.

“For many weeks the draft ordinance under review by the board has had no provision that would give any discretion to the Chief of Police or any municipal representative to allow or disallow an event; impose any limitations or safeguards on such event or demand that any other requirements, even if supported by specific, articulable health or safety concerns, be put in place for the event,” Tannehill said. “Those obligations rest with the venue. While the City does not agree that such reasonable measures tied to specific standards would have been illegal or ‘discriminatory’ even when they were in the ordinance, the ACLU letter incorrectly states that the language remains in the ordinance. It does not.”

Tannehill’s comments refer to the second paragraph of the letter, which paraphrases an older version of the ordinance stating the police chief or a designee may impose certain limitations or additional safeguards at his or her discretion. The limitations, the letter stated, could include time restrictions and “other requirements” deemed necessary.

However, the current version of the ordinance makes no mention of the ability to deny an event, and language alluding to such an idea was removed not long after the ordinance was presented to the public.

The letter also suggests that section 14-103 of the ordinance chose to “target” a business “that hosts events predominantly sponsored by and for black Oxford students and citizens” in its third paragraph. The only business that falls under Mississippi Code Annotated 67-1-5 (m)(ii) is The Lyric Oxford, though the theatre is never directly named in the letter.

However, Tannehill said, as she stated in a July 2 public meeting and at a separate Board of Aldermen meeting, the research and reasoning behind the ordinance can be traced back more than 15 years.

Those who state otherwise, she said, are urged to read the ordinance in its entirety.

Types of events notwithstanding, she said, the City is targeting only “issues created by alcohol, its sale and consumption at bars and restaurants… and its effects on other crimes.”

“As those who have attended the City’s many public hearings have likely heard, The Lyric is the only ‘event venue’ which does not have a notification requirement with an associated fee provision when it hosts large events at which alcohol is served,” Tannehill said. “It has long profited from that distinction, even while the City has sometimes had to scramble to respond to parties or events at this large, downtown forum, for which the City was unprepared to provide additional security, or which may have been in conflict with other events being held simultaneously in nearby areas.”

The Lyric also has never been required to pay a $75 “event notification” fee, she said, while similar venues in town who do not hold ABC permits have done so for years under a separate ordinance. Until Tuesday night’s meeting, language in the ordinance would have required The Lyric to pay a similar fee, but at the suggestion of Alderman Rick Addy that language was officially removed.

In terms of required cameras as proposed in the ordinance, the ACLU letter stated that cameras would be extremely expensive for some businesses. It also accuses Oxford Police Department of having intentions that would violate a Supreme Court ruling in the case NAACP v. Alabama, which stated that that the ability to freely associate includes the right to do so without revealing one’s identity.

“The language in the ordinance stating that the cameras must be ‘sufficient to identify individuals’ and to ‘provide clear observation of the premises and activities by patrons’ undoubtedly reveals that the Oxford Police Department intends to use the camera systems as their own surveillance in investigations and use the footage as evidence,” the letter read.

Tannehill said what she’s learned through conversation with other bar and restaurant owners is that the camera requirements the City is asking for are actually much less than the cameras already in place in ABC-permitted businesses. However, there “is no government surveillance or monitoring by the City or OPD,” she said.

However, she said she appreciated the ACLU’s input on the matter.

“If the bar or restaurant owner disagrees with the (camera) placement requirement after seeking to work out the placement issue, the ordinance provides for an appeal,” Tannehill said. “I believe the Board will work to make sure that their intent is clear, if it is not already, and if an appeal provision remains in the ordinance, that the process is clear. For those critiques, I appreciate the ACLU’s input.”

Opponents of the ordinance have often compared Oxford with the 50 biggest cities in the country, suggesting these cities have no camera ordinances, she said. However, Tannehill said her own research proved at least a third of the cities do have camera ordinances and they are effective.

“The ordinance as written, however, is very reasonable for its purposes, and we have received appreciation and thanks from many bar, restaurant and business owners who both know how hard we’ve worked to craft a fair and reasonable ordinance, and how carefully we’ve listened to criticisms and responded with thoughtful changes to the ordinance,” she said.