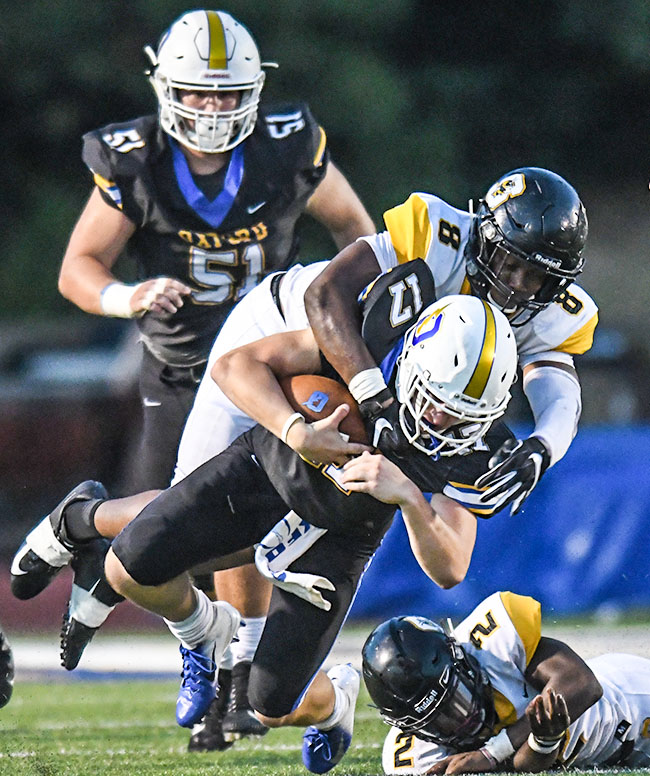 The Little Egg Bowl is becoming a one-sided affair.

For the fifth straight year, Starkville defeated Oxford in the annual game, but this year’s win may have been the most impressive yet as the Yellowjackets dominated for a 56-7 win at  Bobby Holcomb Field on Friday.

It was a competitive game the first 14 minutes with the score tied at 7-all, but the final 34 minutes was all Starkville (2-0), as the Yellowjackets scored 49 unanswered points.

“We were able to run the football a bit against them (in the first quarter) then we started falling behind a little bit,” Oxford head coach Chris Cutcliffe said.

After a punt on the opening drive, and quarterback John Meagher tossing an interception on the second, Cutcliffe put J.J. Pegues under center.

It was beginning to work as the junior rushed for 55 yards on 13 carries in the first half and moved Oxford (0-1) into the Starkville red zone for the only time of the game.

Meagher cashed in the opportunity with a 3-yard run early in the second quarter to tie the game.

With the Chargers finding success again with Pegues’ ground game, it all came to a screeching halt when the tight end suffered an injury to his right leg late in the opening half.

Pegues was taken to the field house on a cart but did return to the sidelines in the second half, though he did not re-enter the game.

Oxford’s another blow in the run game with running back K.J. Wadley also suffering an injury in the second half that kept him from returning to the game.

“We got a little a beat up there, and that changes things,” Cutcliffe said. “That happens in football, and you’ve got to push through, and somebody’s got to step up.”

Run defense became another issue for Oxford for the second week in a row.

The first four of Starkville’s eight touchdowns came on the ground, with the longest being a 45-yard run by the Yellowjackets Rodrigues Clark. The senior running back scored three rushing touchdowns on the night.

Starkville quarterback Luke Altmyer threw two touchdown passes. One went to Jatavious Lucious for 28 yards and the other was caught by Atavious Jones for 5 yards.

Oxford returns to the road with a game at Grenada next Friday.