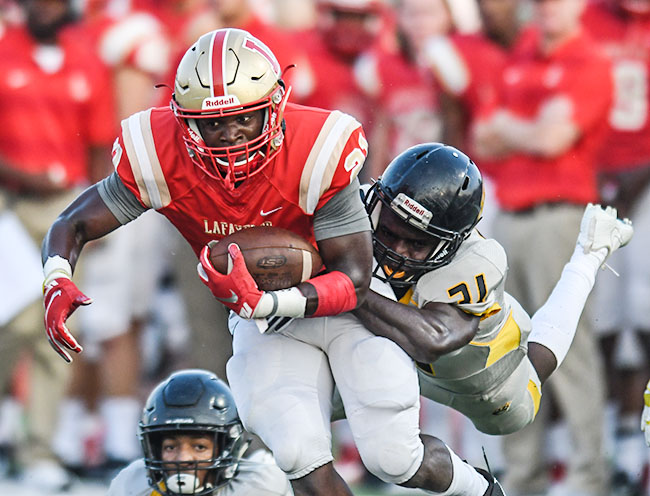 Just like last week against Cleveland Central, the better team showed itself early and often at William L. Buford Stadium.

The Lafayette Commodores proved to be too much to handle as they upended the Charleston Tigers 41-8 on Friday. The ‘Dores advance to 2-0 for the first time since 2015. They now await a matchup against quarterback K.J. Jefferson and North Panola’s offense next week in Sardis.

Friday’s win came as a result of the best week of practice so far this season, Lafayette head coach Michael Fair said.

“We push these guys hard. Monday’s, Tuesday’s, and part of Wednesday’s get pretty physical in practice,” Fair said. “I think these guys are starting to learn that this is what we have to do to be successful on Friday night. It showed tonight.”

The game didn’t start the way Lafayette wanted as they lost a fumble on the opening kickoff.

However, the Tigers were unable to capitalize and the ‘Dores would go on to score on three of their first four possessions.

Lafayette rolled from there.

Jamie Shaw had 17 carries for 125 yards and a score, while Lance Stewart had nine carries, 115 yards and two scores.

Commodore quarterback Randy Anderson also did some damage on the ground with 34 yards and a score on the team’s first offensive possession.

Anderson threw his first passing touchdown of the season with a 38-yard strike to Quinshun Twilley with 12 seconds left in the first half.

Defensively, the only touchdown given up was with three minutes left in the fourth quarter as Charleston’s Keyshun Cashaw punched in a score.

Throughout the course of the night, Charleston’s speed and ability to get to the edge was matched at nearly every turn.

“It was a good night for our defense. It looked like they had a crease, crack, or got to the corner and we had some guys take great angles and tackle well tonight. We have a lot of team speed on defense and it showed tonight,” Fair said.

Quentin James led the ‘Dores in tackles with five, followed by Samuel Woodall, DeDe Miller, and Eric Jeffries with four.

Brandon Turnage also tacked points on the board, thanks to a 17-yard pick-six late in the first half. Turnage added another interception in the second half.