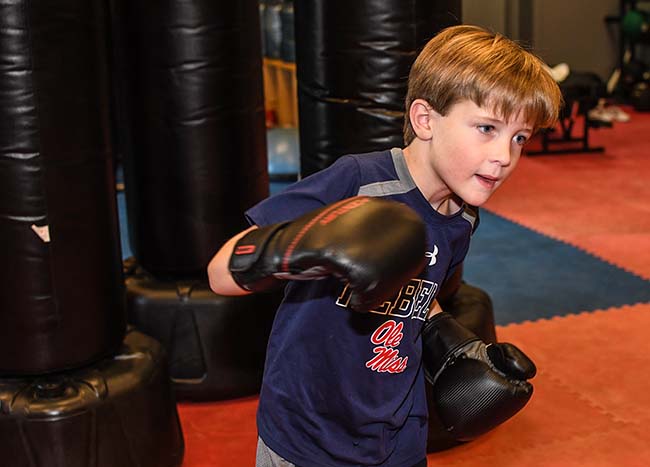 Miller Meisenheimer is fighting an internal struggle, but you wouldn’t know it  as you watch him hop around and run like any other 7-year-old.

Miller was diagnosed with cystic fibrosis when he was 5 weeks old. It was a diagnosis that changed his parents’ world forever.

Not only were they now first-time parents, but parents of a child with an illness with which they were unfamiliar.

“Cystic Fibrosis is something me and my wife were not even aware of,” Tom Meisenheimer, Miller’s father, said. “We had heard about it, but we didn’t know anything about it. So, this was a complete shocker. Anytime you go from not having a kid to having your first kid, then you find out they have a progressive lung disease and they’re going to have it the rest of their life, it was a complete game changer for us.”

A hereditary disorder that affects the lungs, Cystic Fibrosis creates abnormally thick mucus that leads to blocking of the pancreatic ducts, intestines and bronchi. It often leads to respiratory infections.

From the start, the doctors told Miller’s parents he should have an active lifestyle like any other healthy boy would have. In Miller’s case, being constantly active helps keep the lungs from building up mucus.

So, that is what Miller has done.

Miller has played nearly every sport and activity he can, including soccer and swimming.

“(Miller’s) got some good energy. We always encourage that,” Tom said. “He’s done 5Ks. He’s done quite a bit.”

Now, Miller is taking the fight to cystic fibrosis, literally.

A year and a half ago he started boxing classes at High Intensity Training (HIT) Fitness in Oxford, where Codie Shuffield, the gym’s owner, trains him.

Miller and Shuffield connected when Tom’s mother met Codie’s mother, a massage therapist, and Miller was brought up in conversation.

“Honestly, I had no idea how he would respond to it,” Tom said. “I wanted it for him because of a lot of things: his health, getting his lungs moving but also his confidence. He just took to it and he’s improved throughout the time he’s done it and he’s enjoyed it.”

“Boxing gives me a lot of energy,” Miller said in between sparring drills.

Miller is one of the youngest kids Shuffield has trained, which meant tailoring the drills to help keep a seven-year-old’s interest. Shuffield incorporated Miller’s love of animals into the workout by doing drills like bear crawls and bunny hops.

“I’ve gotten pretty good at training kids,” Shuffield said. “You just got to know what they’re into. (Miller) was into animals and there’s tons of workouts. It wasn’t too much of an adjustment and just knowing the attention span is going to be short.”

Along with continuing his boxing classes, Miller is planning to play flag football for the first time this fall.

Fighting for a cause

Shuffield, a Water Valley native, is a former mixed martial artist who has fought in the Bellator MMA promotion and is currently scheduled to have a boxing match later this year that, if he wins, could get him booked on Showtime’s Showcase boxing promotion.

Having the fighting background, Shuffield is putting on an amateur boxing event this Thursday at The Lyric called ‘Thursday Night Fights.’

The event will feature 10 fights on the card with three rounds ranging from two to three minutes bases on the boxers’ skill level.

While the event serves to promote some of the fighters Shuffield is training, a portion of the proceeds will go towards cystic fibrosis awareness.

The event starts at 7 p.m. and is general admission. Tickets cost $25 and can be bought at the door.

Miller will be in attendance and Shuffield plans to have him come in the ring at some point during the night to be introduced to the crowd.