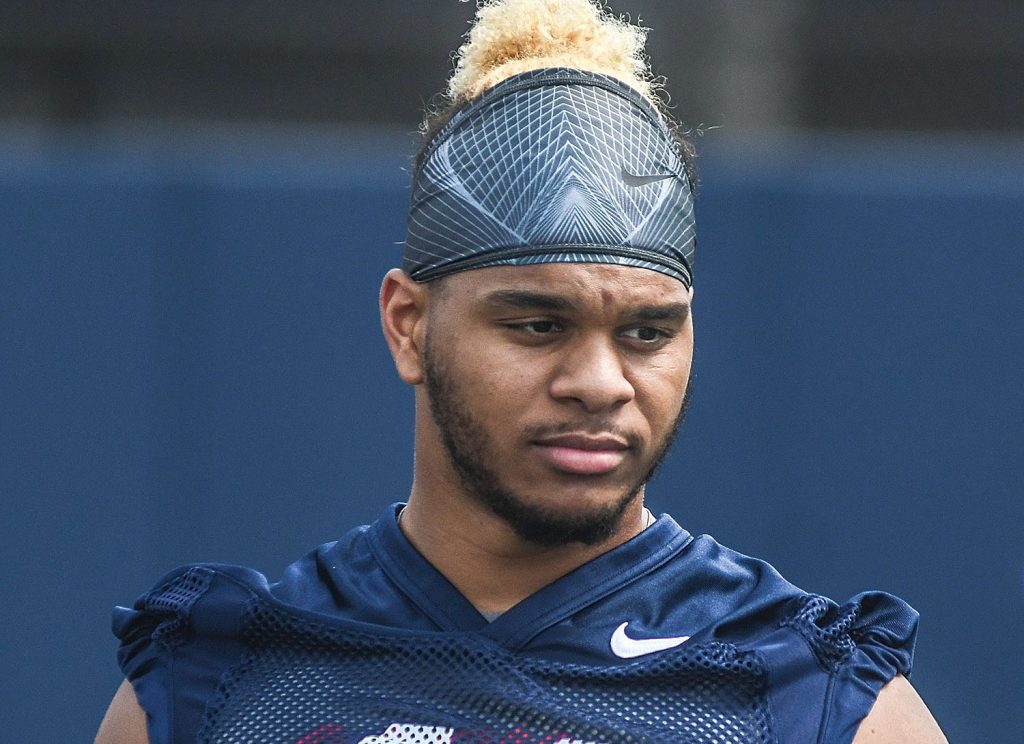 Mohamed Sanogo wasn’t listed on Ole Miss’ two-deep before preseason camp started, but the sophomore linebacker has made a significant move.

Sanogo enters game week atop the depth chart at middle linebacker. Detric Bing-Dukes, a senior with a heavy leg up on Sanogo and redshirt freshman Zikerrion Baker when it comes to experience, opened camp as the starter, but Sanogo took over the top spot midway through and finished camp with the first team, putting himself in position to take the field for the Rebels’ first defensive series against Texas Tech at Houston’s NRG Stadium on Saturday (11 a.m., ESPN).

So what’s been the key to Sanogo’s quick rise to the top? “Mostly communication and knowledge,” he said.

A three- or four-star prospect depending on the recruiting service coming out of Texas’  Plano West High, Sanogo was the headliner of the Rebels’ 2017 linebacker signees. He finished with eight tackles in 11 games last season, mostly contributing on special teams as he worked to learn coordinator Wesley McGriff’s 4-2-5 defense.

Sanogo also had to work on his body. He said he ended last season at 250 pounds but has shed a lot of that excess weight to get closer to 220 heading into this season, which he said has helped improve his lateral movement and overall speed.

But being able to react quicker mentally as he’s gotten more comfortable in the defense has made the biggest difference for Sanogo, who’s taken it upon himself to be more of a vocal presence. For the first time since arriving on campus, he feels like he can adequately help a defense that finished 123rd nationally against the run last season and ranked near the bottom in several other statistical categories.

“I knew (the defense), but I wasn’t confident enough to speak out loud and to control it,” Sanogo said. “But once I saw that and started stepping up, lost some weight and started running better, it just put me in the position I am now.

“Knowing not only where I’m supposed to be and the guy next to me but where everybody on defense is supposed to be. If I see a problem, I get them lined up.”

One player Sanogo has tried to take under his wing is fellow linebacker Kevontae’ Ruggs, who’s lined up alongside Sanogo on the outside the last couple of weeks. Sanogo said he views it as his responsibility to help Ruggs get lined up correctly before the snap so the true freshman can take care of the rest.

“If he knows what to do, he’s running full speed there and making the play,” Sanogo said. “You’re going to notice when he’s on the field.”

Having Sanogo and Ruggs running with the first team falls in line with the coaches’ commitment to playing their most talented linebackers regardless of their age or experience level given the lack of consistent production at the position in recent years. Sanogo said they’ve all heard the pointed criticism, which is doubling as motivation.

“There’s a big chip on our shoulder,” he said. “We’re coming to put the Ole Miss linebackers on the map.”