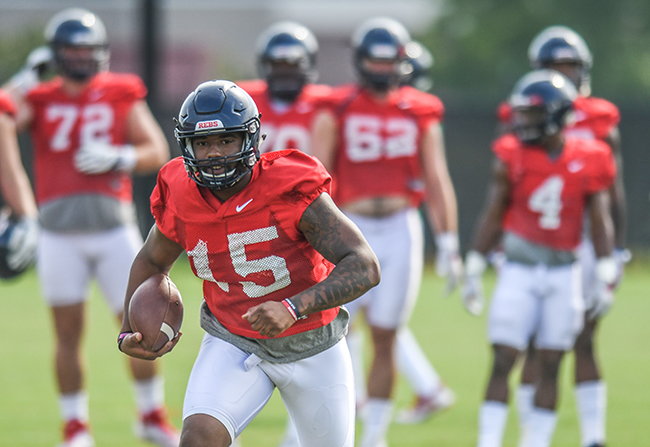 There may not be a receiving corps in the country that attracts more attention this season than the one at Ole Miss.

Dawson Knox is more than OK with it.

It’s understandable. DaMarkus Lodge, the veteran of the group as a senior, DK Metcalf, all 6-foot-4 and 230 pounds of him, and A.J. Brown, a projected first-round pick who led the SEC in receiving yards and touchdowns last season, will be the focal point for every opposing defense this fall. There’s also a running game to worry about paired with one of the SEC’s most seasoned offensive lines, which all could create more opportunities for the tight ends.

“I think we’re going to get our chance this year to really show out,” said Knox, who’s back for his second season as the starter there.

But Knox and position coach Maurice Harris believe that kind of talk is rooted in the collective skill the group has as much as anybody simply forgetting about them.

Also a track athlete in high school, Knox has deceptive speed that he uses to run crisp routes and stretch defenses vertically, something he’s doing more often now that he’s healthy. The 6-4, 250-pounder missed the first two games last season with a stress fracture in his foot and went on to catch 24 passes for 321 yards before having surgery in the offseason that has him “feeling 100 percent,” he said.

The position is deeper with the emergence of Octavious Cooley, who split first-team reps with Knox toward the end of preseason camp. It’s a continuation of his progress since the spring when the former four-star recruit got himself in better shape after ballooning to nearly 300 pounds last season nearly forced him to move to the offensive line.

Now hovering around 260 pounds, Cooley is a physical blocker who “uproots people” in the run game, Harris said, but can also release on a route as he prepares for his biggest role yet.

“It never was a talent issue with Octavious,” Harris said. “It was always learning the offense, being able to execute it and getting the signals down and things of that nature. He did just an awesome transformation getting his life together. And once he got his life together, he really took off on the football field.”

Harris is comfortable enough with each player’s development that Ole Miss could use both simultaneously more often this season, particularly when the Rebels go to more run-heavy packages late in games if trying to preserve a lead.

“I think it adds an extra dimension that we didn’t have last year,” Knox said.

But having both on the field at the same time won’t necessarily be a giveaway as to what’s coming from a position that combined for just 30 receptions last season.

“With us having that flexibility with two guys that are capable of moving the pile on first down but also agile enough to be effective on third and long, I think it’ll be awesome for us to have those guys in the game at the same time,” Harris said.