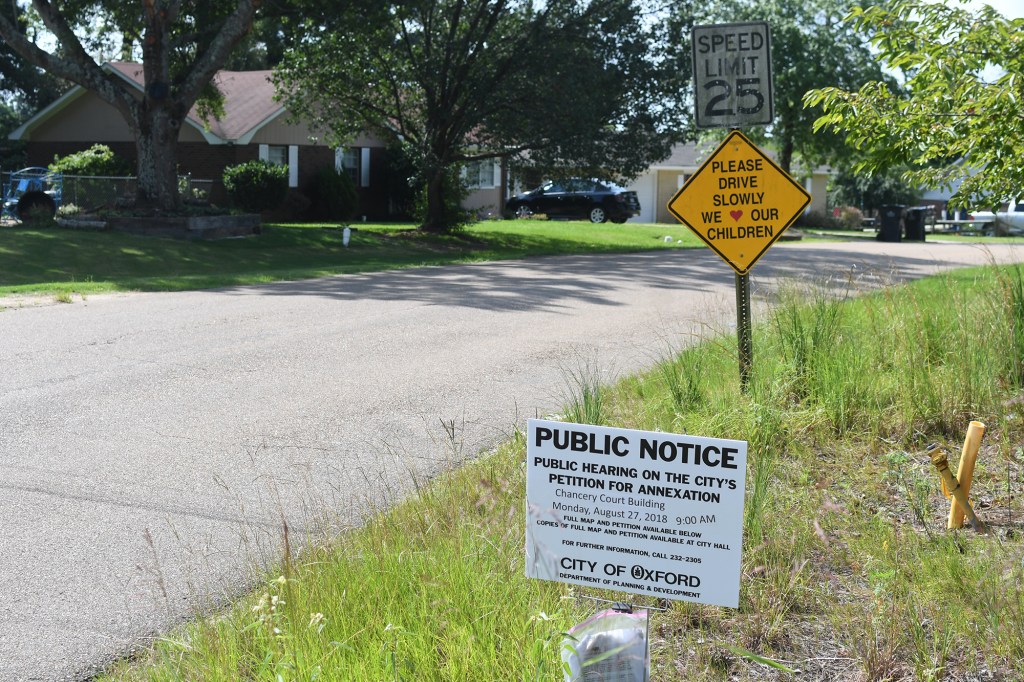 A hearing on the city of Oxford's proposed annexation of several areas, one of which is Thacker Heights, was healed at the Lafayette County Chancery Building in Oxford, Miss. on Monday, August 27, 2018.

Officials from the City of Oxford testified in Chancery Court Monday as to why the City should be allowed to annex 12 square miles of property in Lafayette County.

The annexation, which would bring Oxford’s population to almost 25,000, is something city attorney Pope Mallette said has been in the works for three years.

“The City has been planning and discussing in public meetings a large annexation, probably the largest one the city’s ever had, since December of 2015,” Mallette said. “We’re pushing three years that we have studied, published and held hearings on this annexation. Because of the growth we have experienced even during the study period, we have had another annexation because the growth was so explosive there were areas that already needed to be annexed in that study period.”

Mallette also referenced a four-and-a-half-mile annexation in 2006, the annexation of land on which Baptist Memorial Hospital-North Mississippi now sits in 2013 and the annexation of 160 acres of adjoining property in 2014. All of this was due to “explosive growth,” Mallette said, a term used throughout the hearing by those who testified.

The hearing, which had a total of 60 exhibits and lasted from 9 a.m. well into the afternoon, did not have any registered objections, something Mallette said was due to the number of public hearings and meetings held by the Oxford Board of Aldermen up to that point. Attorney Kirk Milam initially presented an objection on behalf of one of his clients due to zoning concerns, but ultimately decided not to formally file said objection after it was clarified that zoning issues would not be discussed before annexation.

“Regarding the issue with zoning, the court’s charge in granting or denying a decree or petition for annexation doesn’t allow us to address the zoning of either a county or city,” Mallette said. “We’re here… to discuss the proposed annexation area. The City has an extensive zoning process. Once zoning occurs in whatever area, there will be a three-Board of Aldermen meeting process that includes a public hearing.”

The Lafayette County Board of Supervisors implemented zoning in January, but those areas will be rezoned once they are annexed into the City of Oxford. Mallette said the City will take into consideration the previous zoning and land use at that time.

Annexation will also affect Oxford Police and Fire Departments, as OPD Chief Joey East and OFD Chief Mark Heath testified. East confirmed under oath that OPD would be able to adequately police a new population of approximately. 25,000, and that OPD’s response times would stay the same. He also mentioned the need for additional personnel to accommodate expanded city limits.

East stated that the annexation could cost OPD more than $500,000, which would go toward the hire of six officers and the purchase of one new patrol car.

Heath also said additional funds would be needed to accommodate a growing coverage area, but stated that the benefits outweighed the growing pains. One of the biggest benefits, Heath said, would be significant improvement in fire ratings in the annexed areas.

Area 1 of the proposed annexation area includes West Oxford Loop extended, portions of Old Sardis Road leading to FNC Park and Lakeway Gardens; Area 2, in the northeast area of Oxford, takes in a portion of Highway 30 and part of Old Highway 7 North; Area 3 takes in portions of Highway 6, where the new Lafayette County Business Center is being built, Lafayette County School District campus and Brittany Woods; Area 4, in the southern part of Oxford down South Lamar, will take in Southpointe and Twin Gates subdivisions; Area 5 off Highway 6 takes in Thacker Heights and Royal Oaks and Area 6 which takes in property east of Highway 6 north of the Wellsgate subdivision.

Because no objections were formally filed, annexation could take place as soon as the end of September or beginning of October.