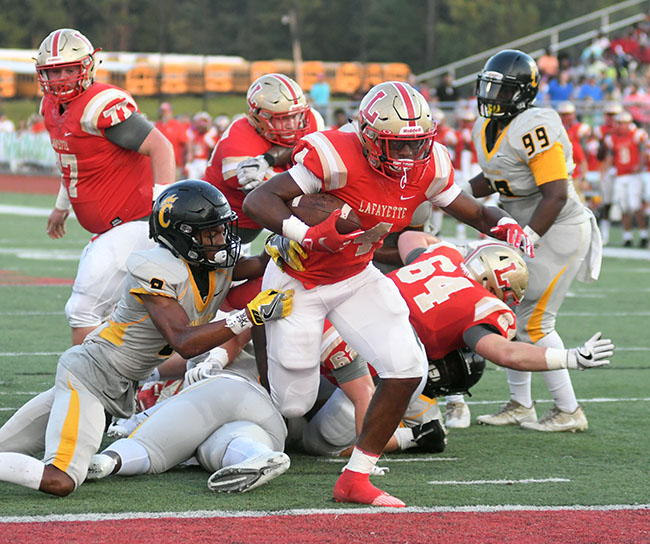 The Commodores ground game is back.

Lafayette has had considerable success over the years with the run game, which in part, is what led the ‘Dores to their first state championship in the last five years during the 2016 season.
This year, the Commodores are early title contenders once again thanks to the success of added pieces and the ground and pound approach.

In their first two games of 2018, the Commodores have rushed for 822 yards and 10 touchdowns. They are on pace to shatter 3,404 rushing yards and 40 touchdowns accumulated during their title run two years ago with an average of 411 yards and five touchdowns per game this year.

It is a return to form for a team that has traditionally be known for their run game.

With a two-headed attack, Lafayette has been unstoppable on the ground in their games against Cleveland Central and Charleston. The Commodores have had multiple running backs with over 100 yards in each of their first two games.

After having to spend most of his time on defense last season, and waiting his turn behind the likes of Tyrell Price and Jamarcus Quarles, it is finally Jamie Shaw, Jr.’s time to shine. In the season opener against Cleveland Central, Shaw rushed for 105 yards and a touchdown. The senior followed that performance up with a team-best 119 yards and a score against Charleston last week.

“When (Shaw) was a sophomore he was in the mix and then Jamarcus had one of those years that I don’t know if anyone really saw coming,” Fair said. “Last year we had some injuries at linebacker, so Jamie was going to have to play some defense for us to even be competitive. That takes away some carries from him. He may still have to play some defense this year but it won’t be the load like last year. We really feel like his place, his home, is in the backfield.”

A new piece to the running back room is Lance Stewart. The senior sat out last season following a transfer from Oxford after the 2016 season. Having Stewart splitting carries with Shaw has helped each stay fresh.

In his Commodore debut two weeks ago, Stewart led the team with 159 yards and tied quarterback Randy Anderson with two rushing touchdowns. Against Charleston, he finished one yard behind Shaw and had a game-high two touchdowns.

“Lance is an explosive athlete,” Fair said. “I think he and Shaw, sometimes they’ll both be in the backfield, but it takes different things to tackle both of those guys. The thing with Jamie is he’s as powerful and explosive in those first five or 10 yards at tailback that I’ve seen in a long, long time. Lance, he’s able to do things and make a move and then he can go. They’re different. One is a slasher with Lance and Jamie is a pounder.”

Matt Luke ‘very confident in what we have in…