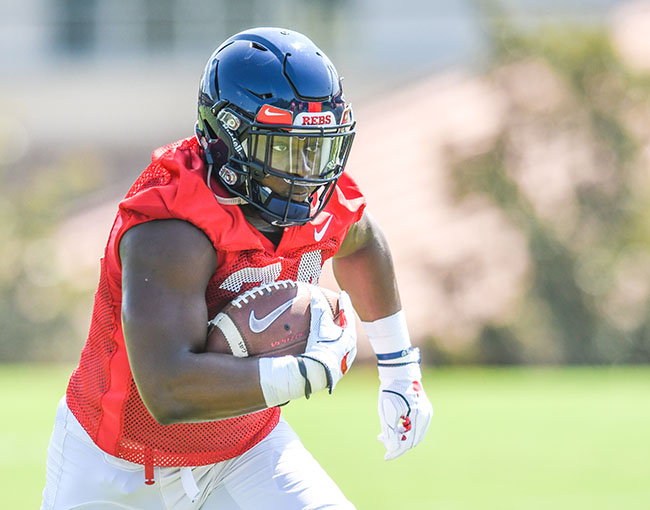 Ole Miss running back Eric Swinney, taking a handoff during football practice in Oxford, Miss. on Friday, August 3, 2018, will be out of action for three weeks due to illness.

An illness has taken Ole Miss’ experience in the backfield from slim to virtually none heading into the season.

Nix said he didn’t know of any other players exhibiting symptoms, but with the contagious nature of the illness, the team has taken precautions.

“We’ve done everything necessary,” Nix said. “We’ve kind of been educated on what he can and can’t do and how it’s going to affect other guys.”

It’s an early blow to a backfield that doesn’t have anybody available for Saturday’s opener against Texas Tech that’s gotten a carry at the FBS level other than reserve D.K. Buford, whom Nix didn’t mention when asked who would be next up at the position behind Scottie Phillips. Swinney was No. 2 on the depth chart behind the junior college transfer heading into the week, but Nix said freshman Isaiah Woullard, converted safety Armani Linton and true freshman Tylan Knight could all gets snaps at some point Saturday.

D’Vaughn Pennamon has returned to practice on a limited basis as he continues to work his way back from last season’s season-ending knee injury but still won’t return to game action until midway through the season at the earliest.

It’s the latest bout of bad luck for Swinney, who suffered season-ending leg and knee injuries in his first two seasons with the Rebels. The fourth-year junior finished last season with 195 yards on 41 carries with three touchdowns.

“His spirit is good,” Nix said. “If you didn’t know it, you wouldn’t think anything was wrong with him. He came to our position meeting, and it was business as usual.”

If there’s anything that worries Nix about all the inexperience at the position, it’s the players’ ability to take the physical and mental reps they’ve rehashed in practices and scrimmages and execute it by themselves in a game. But Nix is confident in the rest of his options.

“I feel really good,” he said. “Of course it’s always different when you get to a game situation, but they’ve all shown signs that they’ll be able to compete at a high level and be able to function.”