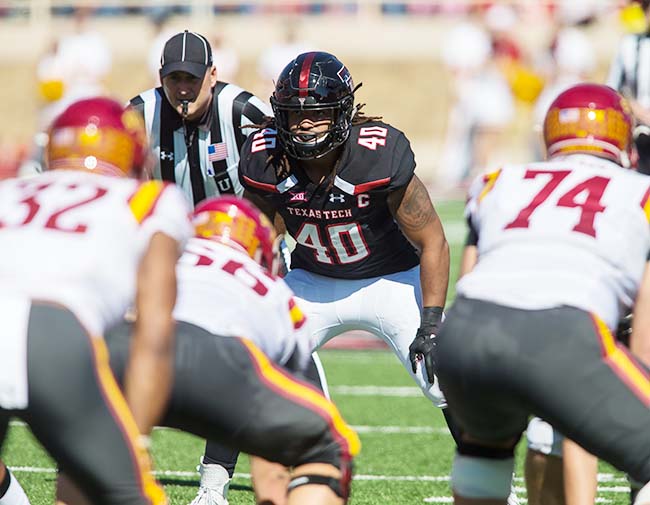 When one thinks of Texas Tech football, it’s the air-raid offense responsible for lightning up scoreboards since the Mike Leach era that initially comes to mind.

But Ole Miss isn’t forgetting about the Red Raiders’ defense.

That side of the ball has been the Achilles heel in Lubbock with Tech winning no more than eight games under coach Kliff Kingsbury despite finishing in the top 25 nationally in yards and points in all but one season since the former Tech quarterback took over in 2013. The Red Raiders are coming off a 6-7 campaign and haven’t posted a winning record in the regular season since Kingsbury’s first year largely because of their defensive shortcomings.

Tech finished no better than 100th in points allowed, passing yards allowed and total yards allowed a season ago, though the Red Raiders made statistical improvements in all those categories from the previous season. With a wealth of experience returning to what proved to be one of the nation’s more opportunistic defenses last season, Ole Miss is expecting to see a different kind of defense when the teams meet at Houston’s NRG Stadium on Saturday (11 a.m., ESPN).

The Red Raiders return 10 starters in fourth-year coordinator David Gibbs’ defense, which will test a new-look Ole Miss backfield looking to balance out the Rebels’ passing game after making a significant improvement against the run last season. Tech was 62nd in rush defense last season after finishing 116th in that category in 2016.

Nose tackle Mychealon Thomas is the only defection from a starting lineup that’s combined for 154 career starts. The unit is led by safety Jah’Shawn Johnson, the veteran of the group with 37 career starts, and All-Big 12 linebacker Dakota Allen, who led the Red Raiders with 102 tackles a season ago.

Allen also accounted for four takeaways while defensive back Justus Parker pulled down a team-high four interceptions last season. That was a theme for a defense that forced 29 turnovers, which led the Big 12 and ranked sixth nationally.

“You always prepare for ball security,” head coach Matt Luke said. “That’s something you’re working on, but you’re aware that they are very, very good. They improved in virtually every category, so this is a defense that’s getting better and returning virtually all of their starters.”

Ole Miss will counter with senior quarterback Jordan Ta’amu, arguably the nation’s most talented receiving corps headlined by projected first-round pick A.J. Brown and a veteran offensive line, all of which Longo is trusting to execute regardless of the different looks Tech may give in Gibbs’ multiple scheme.

But the Rebels aren’t necessarily expecting things to come easy.

“It’s a very formidable defense,” Luke said. “We’re going to have our work cut out for us.”