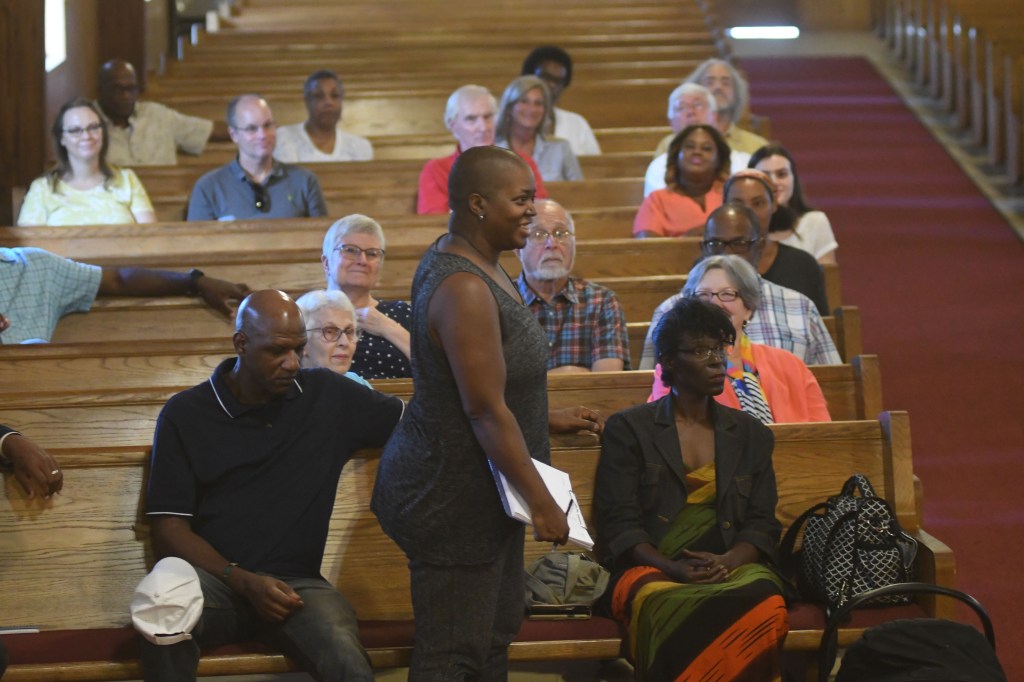 Valeri H. Reaves, a cousin to the Higginbottom family, is recognized as Lynching Memorialization in Lafayette County holds a meeting at the Tallahatchie Oxford Missionary Baptist Association building in Oxford, Miss. on Tuesday, August 28, 2018. Elwood Higginbottom was lynched in Oxford in 1935. A historic marker will be placed in Oxford in October.

During a meeting of the Lynching Memorialization in Lafayette County group on Tuesday night, members of the community and of lynching victim Elwood Higginbottom’s family spoke about their experience over the past year and a half of learning about the fate of their forefather.

Higginbottom, the last recorded lynching victim in Lafayette County, was killed in September 1935 after he shot and killed a white man in self-defense. Since that night, the fabric of his family changed. However, as April Grayson of the William Winter Institute for Racial Reconciliation pointed out, the incident affected more than just Elwood’s wife and three children.

“Elwood’s wife, his children and some brothers and sisters who were also threatened with lynching or terrible violence, fled overnight and eventually ended up settling in different parts of the country,” Grayson said. “One of the wonderful things that’s come out of this is, some of the press coverage it’s received has reconnected these family members who had completely lost touch after the lynching.”

Valeri Reaves, a cousin of Higginbottom and the family’s de facto historian, also spoke at the meeting about the way the process of reconciliation with and recognition of a dark part of the past has changed her life.

In 2017, Reaves said, she was reeling from the death of her brother, who began tracing back the family history. However, the once the lynching memorialization project came along, Reaves said she found a new joy in learning more about the family she never knew she had.

“This is really a phenomenal thing. When I lost my brother, we were very close and I didn’t know how I was going to go on. But through the project that I inherited from my brother, I have more family than I know what to do with,” Reaves said. “I have over 2,000 family members that we have connected. We started having family meet-ups, so we’re actually getting to know each other. … We’re getting to see what each other looks like and see ourselves in each other.”

While Higginbottom’s direct descendants are now situated mainly in the Greater Memphis Area, Reaves explained there are several branches of her family spanning from Akron to Boston. Some distant relatives, presumably those who were not directly threatened after the lynching, still live in the LOU community.

Reaves thanked the crowd of approximately 60 for their support in helping her family heal, something that culminated when the Equal Justice Initiative national lynching victim memorial opened this summer. Seeing living leaders of the Civil Rights Movement, she said, helped her realize that Higginbottom’s death was not in vain.

“Elwood was in the process of making a way to provide for his family beyond himself, and it was stripped away,” Reaves said. “I was one of the members at the grand opening (of the monument). There are no words. It was so moving.”

Another member of the lynching memorialization group, Alonzo Hilliard, spoke about the significance of the historic marker and events leading up to its unveiling.

As someone who’d been with the Higginbottom family on their journey of discovery, he said, Higginbottom came to symbolize the many sharecroppers who came before and after him.

“What we’re trying to do here is help his family memorialize Mr. Higginbottom in a way they can be proud of what happened and the way he died. He died for them, he loved them, he wanted to keep their property, and therefore, he got lynched.”

Those who are interested in joining Lynching Memorialization in Lafayette County may do so by visiting their Facebook page. The group is also requesting those with oral histories and descendants of other lynching victims to contact them as part of efforts for historic preservation and research.