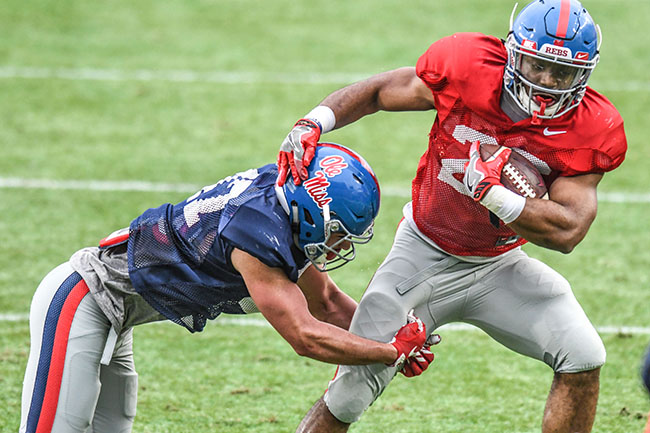 Ready or not, Ole Miss’ young running backs are about to get their shot.

Jordan Wilkins is gone, D’Vaughn Pennamon is still recovering from last year’s season-ending knee injury, and Eric Swinney is fighting a bout of mononucleosis that will keep him for at least the first two games. That leaves true freshmen Isaiah Woullard and Tylan Knight along with Armani Linton, a converted safety who’s yet to get a collegiate carry, as the viable options behind Scottie Phillips for the Rebels’ opener against Texas Tech on Saturday.

One of the Rebels’ bigger backs heading into the season at 220 pounds, Swinney’s absence also cuts into Ole Miss’ bulk at the position. The 5-8, 211-pound Phillips will get a majority of the carries while the 5-9 Woullard (200 pounds) and Knight, one of the smaller players on the roster at 5-7 and 170 pounds, are likely to rotate in at some point depending on the situation, running backs coach Derrick Nix said.

From what quarterback Jordan Ta’amu has seen from the youngsters in the preseason, though, their looks can be deceiving.

“Those young guys are quick, fast and physical,” Ta’amu said. “They’re not afraid to step in the hole and take a hit. They look light, but they can hit heavy. … They’re learning and progressing as we go on.”

Nix said he feels equally as good about all of his backs being prepared to contribute both mentally and physically despite being so green, though he’s anxious to see how they react in a game. Ta’amu said he’s offered some advice to Woullard, Knight and Linton in particular this week, telling them “just look back at your training like coach (Matt) Luke says. Just go out there, ball out, play hard and play for the person next to you.”

Luke shares that confidence in what the Rebels have to work with at the position for the time being.

“It’s an unfortunate break for (Swinney), but thankfully we have some capable guys ready to step up,” Luke said.

Despite its struggles, Texas Tech’s veteran defense has Ole…