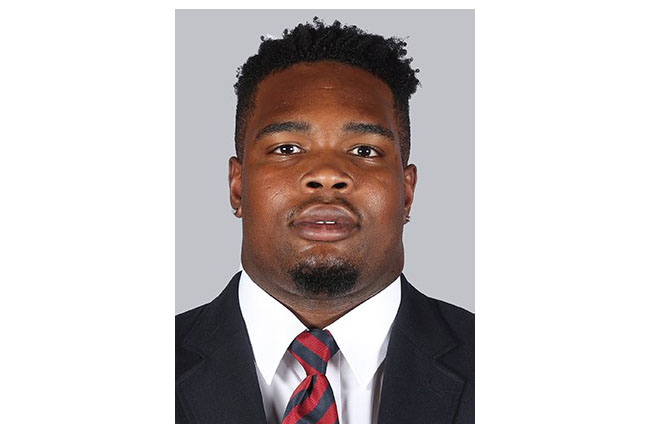 Austrian Robinson has been a scholarship player at Ole Miss for three seasons and has never drawn a start.

That will change Saturday.

Robinson finds himself at the top of the depth chart at defensive end heading into the Rebels’ opener against Texas Tech on Saturday. Senior Victor Evans and sophomore Ryder Anderson were also in the mix to start, but it’s Robinson that will take the first snap against the Red Raiders opposite Qaadir Sheppard as the Rebels begin life without Marquis Haynes and Breeland Speaks.

He’s played in 15 games at Ole Miss with his most extensive playing time coming last season. The fourth-year junior finished with 29 tackles, 3.5 tackles for loss and 1.5 sacks in 10 games and ended the season with a career-high eight tackles in Ole Miss’ 31-28 win over Mississippi State, creating momentum that carried into the spring and summer.

“Austrian has really kind of picked up from last year,” defensive coordinator Wesley McGriff said. “We always tease him that he doesn’t have the greatest build in the world, but man he’s productive. He’s really consistent.”

A 6-foot-4, 296-pounder that’s gotten most of his playing time as a backup defensive tackle, Robinson is a bigger body that will be counted on to set the edge as Ole Miss tries to improve a run defense that’s been among the nation’s worst the last two seasons, but his mobility at that size will allow the Rebels to continue using him at different spots up front. Robinson got reps at both tackle and end during preseason camp and is comfortable playing either position.

“Wherever they need me to go, just go there and play,” Robinson said during camp.

While Robinson could be used as an interior rusher on obvious passing downs when the Rebels want to get more speed on the field, McGriff didn’t rule out the possibility of Robinson’s primary role shifting back to the inside without many proven options behind Josiah Coatney and Benito Jones. That will also depend on how Evans, Anderson, junior college transfer Tariqious Tisdale and Charles Wiley progress over the course of the season, but McGriff said he can count on Robinson being ready wherever he lines up as he prepares for his biggest role yet.

“He’s another guy with a really strong football IQ,” McGriff said. “He doesn’t make many mental mistakes. He may make a couple of execution errors, but he can play anywhere on the interior of the line and be solid, sound and productive. That’s where he separated himself.”