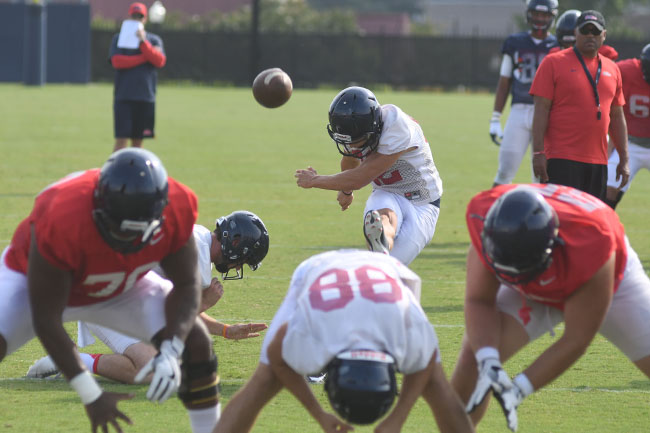 Gary Wunderlich is the most productive placekicker in Ole Miss history. Will Gleeson is an experienced punter.

Neither one of them is around anymore.

The Rebels are starting over at both positions with much greener legs. Luke Logan heads into his sophomore season as the primary placekicker while Mac Brown, another sophomore walk-on, will handle the punting duties.

Brown is taking over for a four-year starter in Gleeson, who finished his career sixth all-time in program history in punts (180) and eighth in punting average (42.2). Brown displayed similar leg strength as a backup last season, averaging the same distance on five punts with his longest covering 54 yards.

Head coach Matt Luke praised Brown for his consistency in preseason camp while 6-foot-3, 210-pounder has also flashed some athleticism that could allow the Rebels to get creative at times on fourth down.

“He can do a lot of different things,” Luke said. “He can run it, he can throw it, and he can really, really kick. I think he provides us some opportunities for fakes. I’ve been very, very impressed with him.”

Logan has even bigger shoes to fill.

Wunderlich not only ended his career as Ole Miss’ all-time points leader (350) but also as the program’s most accurate kicker, connecting on 83.1 percent of his field goals. A Lou Groza Award semifinalist in 2016, Wunderlich is also the program’s all-time leader in field goals (64), made extra points (158) and extra point attempts (162).

“It’s a huge challenge to replace Gary,” Logan said. “My goal is to do the very best I can and not make Rebel Nation forget about Gary but make a name for myself and live up to the legacy Gary has brought to this school.” 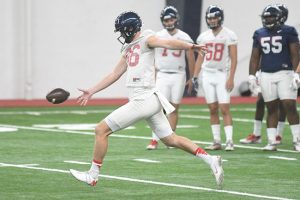 Logan will also handle kickoffs for the second straight season, a dual role he’s comfortable with having done both in high school, but his primary focus is establishing consistency as a placekicker. Logan said he’s most comfortable from 45 yards and in, though he’s capable from longer distances.

Kicking in the Rebels’ opener against Texas Tech on Saturday won’t be Logan’s first experience with that. Filling in for an injured Wunderlich at times last season, Logan went 2 of 3 on field goals and 9 of 9 on extra points, though his longest kick was just 25 yards.

Regardless of the distance, having already gone through the routine in a game is helping calm Logan’s nerves as he prepares to take over full-time. It’s a routine he hopes will eventually make him as consistent as his predecessor.

“We’ve had a line of great specialists,” Logan said, “and I just hope to be the next great one in that line.”

Oxford looking to bounce back at Grenada