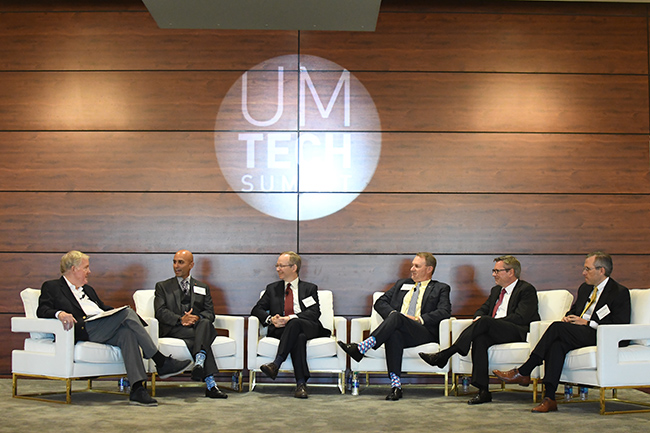 Jim Barksdale, from left, Nishanth Rodrigues, David Steel, John Felker, Rob Carter, and Kevin O’Toole participate in a panel discussion at the University of Mississippi Technology Summit at the Inn at Ole Miss, in Oxford, Miss. on Wednesday, Aug. 29, 2018.

The University of Mississippi hosted its third-annual Tech Summit on Wednesday, bringing together leaders from government, business and higher education to explore trends in technology and stimulate discussions about technology-related needs.

Guest speakers at the summit included Rob Carter, chief information officer at FedEx, and Michael Kratsios, deputy assistant to the President, Office of Science and Technology Policy. Mississippi’s own U.S. Sen. Roger Wicker was also in attendance, and said the event demonstrated the opportunities Mississippians are reaching for in the tech industry.

“We have great opportunities to keep our home-grown talent in Mississippi, and technology employment, technology education, technology innovation is part of that,” Wicker said. “I hope we follow up on some of the suggestions from the audience, that we take this sort of discussion into action items that we can use at the state level and at the federal level.”

As chair of the U.S. Senate’s Communications, Technology, Innovation and the Internet subcommittee, as well as a member of the Senate Commercial Committee, Wicker said he was highly impressed with the speeches given by students from the University about their own experiences with technology and education.

Six students addressed summit attendees, speaking on a wide range of topics, from the Chinese Language Flagship Program to the McLean Institute’s Catalyzing Entrepreneurship and Economic Development Initiative. Alyson Best, director for the Office of Technology Commercialization in the office of Research and Sponsored Programs at the University, said she was excited for the opportunity to display the ways students are using technology to its fullest potential.

“What’s absolutely extraordinary in an event like this is you get to see not only is the University a driver in (the Mississippi tech industry), but we’re also on the cutting edge as users,” Best said. “What strikes me the most is, not only have they been working with technology before they arrive at Ole Miss in the core education they receive, but they took advantage of all the other resources that are currently available on campus in order to maximize their value once they leave Ole Miss.”

Preparing young Americans for the workforce – in university lecture halls or vocational training – is something Michael Petters, CEO of Huntington Ingalls Industries, said is a major focus for his company.

As the largest employer in both Mississippi and Virginia, Petters said, Huntington Ingalls has made it a point to use its influence to help shape the world of workforce readiness. The company has already invested millions of dollars in three high school shop programs near its Pascagoula shipyard, but Petters said they’re not stopping there.

“We like to think of ourselves as a workforce development company,” Petters said. “Whether it’s skilled craftsmen or engineers or advanced engineers, we’re very engaged in that and have a lot of our employees who’ve worked that pipeline and tried to shape it so when a product comes out, it’s ready to use.”

UM Chancellor Jeffrey Vitter, a distinguished professor of computer and information science, said the summit is a way to demonstrate the way Ole Miss continually exemplifies its identity as the state’s flagship university.

Bringing people together on campus for events like the summit, Vitter said, creates an environment for “interactions and thought power” to solve real challenges people face.

“The innovation that we have when we bring people together is just something that gives me great optimism for the future, because I know that whatever we face, we have the talent to come up with creative solutions,” Vitter said. “Higher education is the most important investment that any state, any governing entity can make. It’s an investment for the future, because the payoff is the society, the opportunities, the economic development that it brings. It’s immeasurable.”

The University’s next step in the world of technology and innovation, Vitter revealed, is the construction of the Science and Innovation Institute. Branded as the “biggest project ever on the Ole Miss campus,” the institute will be housed in a building of more than 200,000 square feet.

In the building will be classrooms unlike any other the University has seen, he said.

“We’re going to actually start the construction this coming academic year. We’ve been doing all the infrastructure work, because there’s so much underground that we had to uncover and move and fix,” Vitter said. “… It’s going to be filled with state-of-the-art active learning classrooms, where we teach using the technology we’re pioneering with the Gates Foundation to develop. This is an exciting building that’s going to be a game-changer for Ole Miss for generations to come.”

The building, Vitter said, is expected to be complete by 2021.