Oxford looking to bounce back at Grenada 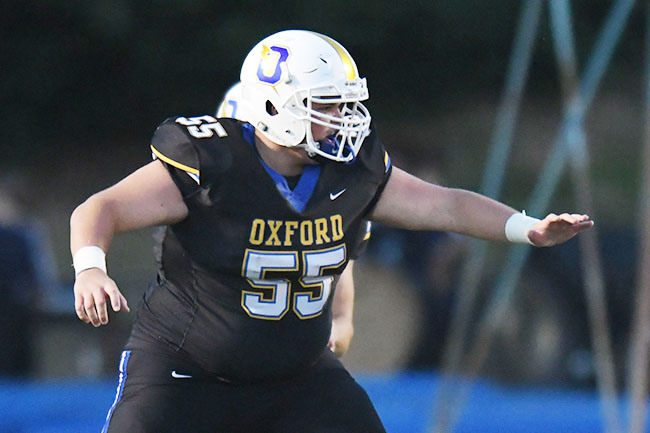 Last week’s Little Egg Bowl loss to Starkville was one to forget for Oxford, which is exactly what they did.

The Chargers moved past their 56-7 defeat at the hands of No. 1 Starkville and turned the page towards the rest of their season.

Even with the put the past behind you mentality, there was still plenty of work needed to be done coming out of the Chargers’ first official game of the season.

“It’s one of things where obviously we need to tackle better and we need to finish drives better, offensively,” Oxford head coach Chris Cutcliffe said. “We’ve taken the approach with the team of lets fix what needs to be fixed but we’re not dwelling on what happened last week. We’ve got a non-district schedule and it truly is one week at a time.”

The loss to Starkville was not a season-killer but it leaves only three more opportunities for Oxford to improve before entering into the stretch of the season that does matter – region play.

A couple things that will help get the Chargers (0-1) heading in the right direction is the return of key offensive pieces. J.J. Pegues and K.J. Wadley each left the game last week with injuries that looked to potentially keep them out of action for a period of time. Luckily for Oxford neither were too banged up and have returned to practice.

Not losing Pegues is a big plus for the offense. During last week’s game Pegues started playing under center the wildcat formation and was having success. Before the injury Pegues finished with 55 rushing yards and help lead Oxford to their only scoring drive of the night.

“That’s been the plan all along is to use J.J. in all different places,” Cutcliffe said. “He’s obviously a very gifted athlete and he’s very versatile, very smart. We knew going into the season that J.J.’s versatility is something that we’ve got to take advantage of.”

Oxford now turns their attention to this week’s challenge in the Chargers of Grenada this Friday at 7 p.m. (95.5 FM). The Chargers hit the road for the second time this year against a team that has two very different results to start their season.

Grenada (1-1) defeated Cleveland Central 40-8 last week after being shutout by Christian Brothers out of Memphis, 7-0, in week one.

“With Grenada, the number one (challenge) is your going to face a physical rushing attack,” Cutcliffe said. “That’s what they’re built on. That’s what they’re known for and they do a good job of it so we’ve got to be able to handle that defensively.”