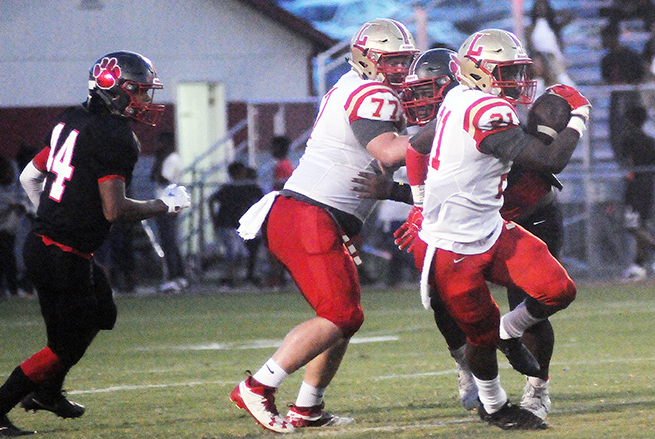 Lafayette’s Lance Stewart with a carry against North Panola at North Ponola High School in Sardis on Friday. (Jake Thompson)

SARDIS — During pregame, Lafayette’s Brandon Turnage carries around a briefcase.

According the senior, he does so because the Commodores placed a lot of money in the bank over the summer. Now that it is football season, Turnage said, it is time to make a withdrawal.
Lafayette made their first big withdrawal of the season on Friday with a 33-14 win over North Panola.

“I thought we played hard. I didn’t think we always played well, but we played hard,” Lafayette head coach Michael Fair said. “What we’ve been through as a program and a staff and we’re in a good place right now but we’ve go so much work to do.”

Lafayette (3-0) jumped out to the early advantage when quarterback Randy Anderson found Turnage for a 44-yard touchdown pass on the first play of their second drive of the game.

Jamie Shaw scored on a three-yard run late in the half to give Lafayette a 20-7 lead at halftime.

Lance Stewart and Randy Anderson had rushing touchdowns in the second half to help Lafayette ice the game. Anderson’s was a 62-yard scamper with less than a minute left in the game for the winning margin.

Jefferson made things tight with a 40 yard touchdown run in the third quarter, cutting Lafayette’s lead to six. The two touchdowns were the only scores Lafayette’s defense allowed the Arkansas commit to have.

Jefferson did show signs of why he is a highly touted recruit, creating space with his legs and extending plays with his arms to keep drives alive.

“It doesn’t feel like (we stopped Jefferson) because he completed some balls and extended some third down plays,” Fair said. “We had guys draped all over him but he managed to throw balls out of bounds and great players do that. We’ve got to learn from that.”

Lafayette now turns their attention to Friday’s match up with Oxford in the annual Crosstown Classic and look to avenge last year’s loss on their own field.