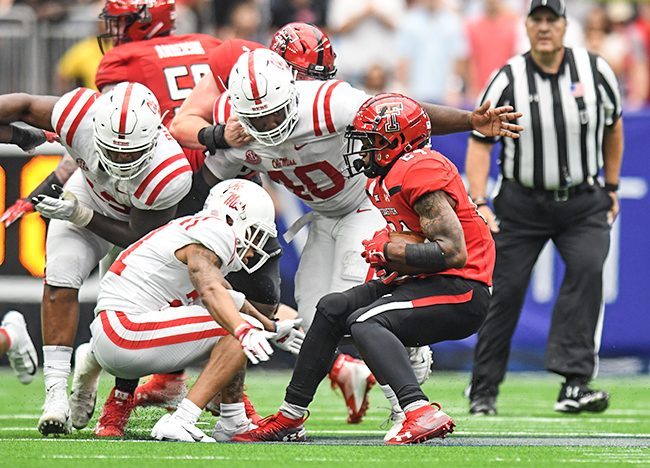 HOUSTON — Texas Tech is going to throw the football often regardless who’s taking the snaps behind center, so Ole Miss’ didn’t have to change its game plan much when the Red Raiders’ quarterback did.

After leading Tech on an 11-play, 90-yard scoring drive on its first possession, McLane Carter lasted just two more series after suffering an ankle injury. That brought on true freshman Alan Bowman, whom the Rebels had prepared for along with sophomore Jett Duffey with Tech coach Kliff Kingsbury electing not to name a starter before the game.

Bowman went 29 of 49 and tossed one touchdown. Ole Miss defensive coordinator Wesley McGriff mixed in an occasional blitz, but with Tech turning to the short passing game in order to simplify Bowman’s reads and get the ball out of his hand quickly, the Rebels largely stuck with a dime package against the Red Raiders’ bevy of receivers and tried to keep everything in front.

It largely worked as Bowman averaged just 9.4 yards per completion.

It was part of a bend-but-don’t-break day for a defense that’s ranked near the bottom in several national categories the last two seasons. Ole Miss allowed 486 total yards but yielded just two more touchdowns after Tech’s opening march and turned the Red Raiders over on downs three times in the fourth quarter, including a stop after DaMarkus Lodge’s fumble gave Tech the ball at midfield in what was a 37-27 game at the time.

“When they fumbled, we were like, ‘All right, let’s get the offense the ball back so they can score.’ That was our mindset,” linebacker Mohamed Sanogo said. “We weren’t thinking, ‘Oh no.’ We’ve got to put our helmet on, run out there and go stop them. That’s what we did.”

A defense that finished 123rd against the run last season gave up nearly 5 yards a carry. That will continue to be a focus, McGriff said, but the Red Raiders didn’t produce the explosive plays that constantly burned the Rebels a season ago. Tech’s longest run went for 19 yards while its longest play covered 31.

“Our guys did a great job of keeping the lid on the coverage and their running backs in check,” McGriff said.”

Luke Logan’s debut as the Rebels’ full-time placekicker was flawless.

Taking over for Gary Wunderlich, the program’s all-time scoring leader, Logan connected on all four of his field-goal attempts. Three of those came from inside 30 yards while he connected on a career-long 39-yarder late in the second quarter to give the Rebels a 30-17 lead at halftime.

Logan had some experience after appearing in a handful of games as a freshman last season. He’s 6 for 7 on field goals in his young career.

“We’ve gotten to the point where it’s the same thing no matter if it’s a game or practice,” Logan said. “There weren’t much nerves because this is something we’ve done before, and everything felt really smooth today.”

Some returned and some didn’t, but Ole Miss had a handful of starters leave with injuries.

Center Sean Rawlings suffered a shoulder sprain in the first half and went down again while favoring his leg in the second, though the senior finished the game. Royce Newman took over at right tackle for Alex Givens, who spent most of the fourth quarter being monitored by the medical staff on the sideline.

Linebacker Kevontae Ruggs’ collegiate debut didn’t last long after the freshman suffered a head injury in the first quarter that kept him out. Cornerback Jaylon Jones went down in pain after injuring his leg and had to be helped off the field. Jones, who also doubles as one of the Rebels’ top special teamers, went 94 yards for a touchdown on his first kickoff return.

Luke said afterward he didn’t have an update on the statuses of Jones, Givens or Ruggs.

Ole Miss has won 19 of its last 22 season openers, including two straight, and has won 76 percent of its openers all-time. … The Rebels improved to 4-2 in the all-time series with Texas Tech with all four of their wins coming at a neutral site. … Ole Miss is 15-12 against Big 12 teams. … Three of Ole Miss’ scoring drives took 50 seconds or less.

Ole Miss’ Scottie Phillips ‘put himself on the map’…