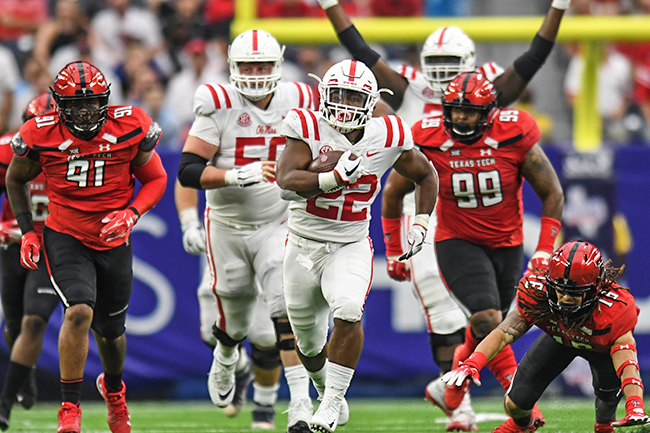 HOUSTON — Ole Miss’ coaches have talked since the spring about Scottie Phillips’ ability to make one cut, get downhill and explode past defenders once he hits a crease.

Phillips put that explosion on display for a national television audience Saturday.

The Rebels’ running back racked up 204 yards and a pair of touchdowns in helping Ole Miss to a 47-27 win that ended up being the most successful debut ever for an Ole Miss running back once he was done burning the NRG Stadium turf. Phillips became the first Ole Miss player to rush for more than 200 yards in a game since Brandon Bolden did it against Fresno State in 2010 on a day when the Rebels surpassed that mark for just the 10th time in program history.

“He put himself on the map,” quarterback Jordan Ta’amu said. “He’s on the radar.”

The 5-foot-9, 211-pound Phillips impressed with a decisive, physical running style in the spring and in preseason camp after running for more than 2,200 yards the last two seasons at Jones County Junior College. Texas Tech played with nine starters back from a defense that improved to 62nd nationally against the run a season ago, but the Red Raiders saw a little bit of everything from Phillips, who averaged nearly 13 yards a carry.

With Ole Miss driving in the second quarter looking to extend a 17-7 lead, Phillips took the handoff on fourth-and-1, bounced outside and stiff-armed a Tech defender before breaking into the clear for a 38-yard touchdown. He then showed his shiftiness midway through the third quarter when he broke through the line, left a Tech safety grasping for air after giving a subtle juke and outracing the rest of the Red Raiders’ defense 65 yards to extend the Rebels’ lead to three scores.

Phillips added a 44-yarder in the fourth quarter for good measure to cap a debut that surpassed even his own expectations.

“I didn’t (think I’d run for 200 yards) to be honest,” Phillips said. “The o-line did a great job paving the way for me. I just found the hole and was running through it.”

Said head coach Matt Luke, “I was cautiously optimistic because I’d seen a lot of really, really good things in the spring and in fall camp. He has short, quick bursts but he also has the breakaway speed where he can finish it when he breaks the line. Really, really pleased to see him have success.”

Phillips was less efficient on his other 13 carries, which totaled 57 yards. Freshman Isaiah Woullard got just four carries and netted two yards as Phillips’ primary backup with Eric Swinney unavailable for the first few weeks of the season.

Luke said offensive coordinator Phil Longo said that will be a focus as Ole Miss tries to round out its offense, but for the back who will likely be called on to carry the load for a while, it was a memorable start.

“I’m very comfortable with that role if that’s what they want me to do,” Phillips said.