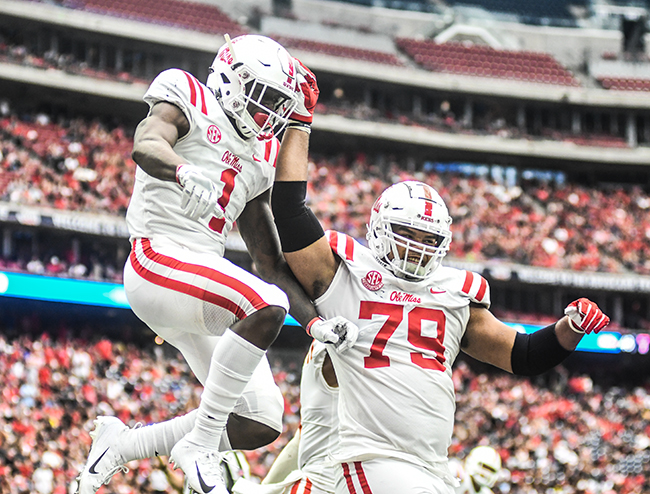 HOUSTON — Taking on a fellow Power Five opponent to begin its season, Ole Miss got a better gauge than those teams that opt for the easy win out of the gate of where it stands with an entire season still looming.

It’s still just one game, and coaches love to throw out the constant (yet usually true) cliche that their teams make the most improvement from Game 1 and Game 2. But you can only assess what you’ve seen so far, and here’s what I saw Saturday: Ole Miss can explode for points in a hurry (duh) while the defense is a work in progress.

In other words, the team I watched beat Texas Tech 47-27 at NRG Stadium looked an awful lot like the one I saw over the course of 12 games last season.

Texas Tech’s defense is bad, and if doesn’t get better in a hurry, the Kliff Kingsbury era in Lubbock will be over sooner rather than later, but Ole Miss’ receivers are going to make a lot of defenses look silly. Covered, uncovered, partially covered, it doesn’t matter with DK Metcalf, DaMarkus Lodge and A.J. Brown. They’re going to make plays all over the place like they did Saturday when Metcalf ran past everyone for a 58-yard score on the game’s second play, Brown hauled in a 34-yard score and Lodge (and Braylon Sanders) consistently beat one-on-one coverage for big gainers down the sideline as Jordan Ta’amu piled up 336 passing yards on just 22 completions.

One of the big questions coming into the season was whether the Rebels would be able to balance it out like they did last season with 1,000-yard rusher Jordan Wilkins, but it looks like the Rebels will be OK there with Scottie Phillips and a veteran offensive line if Phillips can stay healthy. The junior college transfer showed why he separated him from the pack in the competition to replace Wilkins with a mix of physicality, shiftiness and explosiveness that no other back on the roster possesses, ripping off runs of 38, 44 and 65 yards on his way to the most rushing yards for an Ole Miss player in nearly a decade.

But nothing was talked about more than a defense that needs to be significantly better in coordinator Wesley McGriff’s second season if the Rebels want any chance to be better than that sixth-place finish in the SEC West that was predicted of them in the preseason. Ole Miss was far from great on that side of the ball Saturday with Tech piling up nearly 500 yards of offense with a freshman quarterback taking the snaps for the better part of three quarters, though, if you’re a fan, there were some reasons to be encouraged.

Against a good but not great pair of running backs and a Tech offensive line that spends much more time working on pass protections than run concepts, Ole Miss’ much-maligned run defense gave up 164 yards and a pair of touchdowns on 39 carries. That was also while breaking in two players each making their first career start in Mohamed Sanogo and true freshman Kevontae’ Ruggs at a linebacker position that had to do some more shuffling when Ruggs left in the first quarter after suffering a head injury (coach Matt Luke didn’t know the severity of the injury immediately after the game).

Tech constantly threatened with seven trips inside the red zone, but Ole Miss bent more than it broke by allowing just two touchdowns in the final 55 minutes and turning the Red Raiders over on downs three times. For a defense looking for any boost of confidence in can get, Ole Miss will gladly take it.

Once Ole Miss disposes of FCS member Southern Illinois next Saturday at Vaught-Hemingway Stadium, the schedule gets significantly tougher starting the following week with top-ranked Alabama, which ran Ole Miss out of Bryant-Denny Stadium last season.

Saturday was a reminder that some things, particularly an offense that can throw the ball around the yard with the best of them, need to stay the same while other things can’t. Not if Ole Miss plans on proving the naysayers wrong.

Fortunately for the Rebels, there’s some time to make the necessary changes.