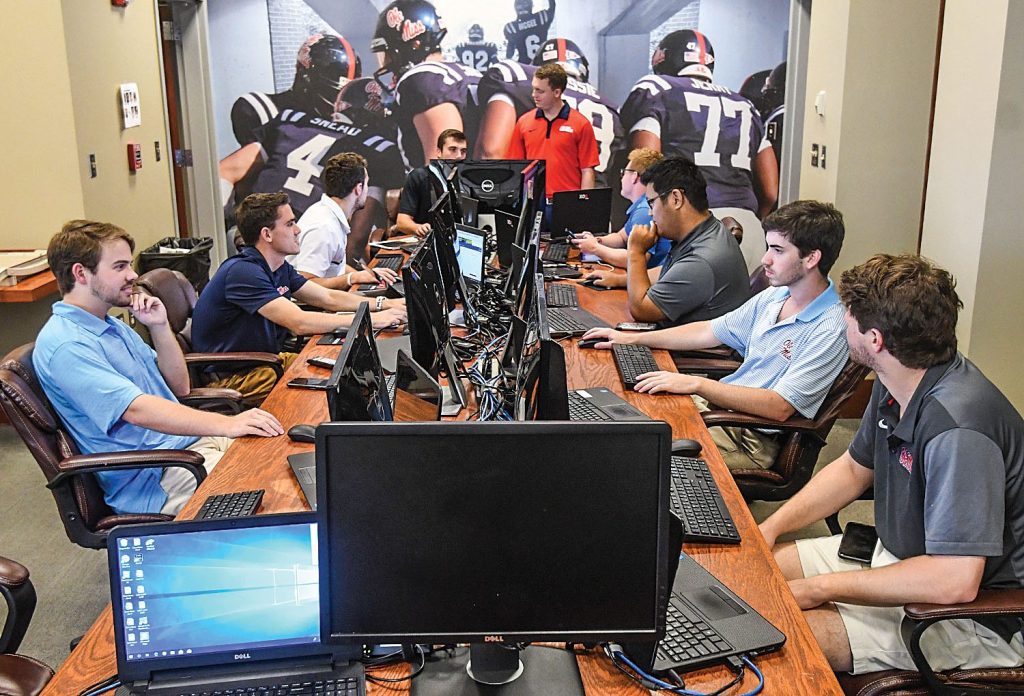 Members of Ole Miss' Shark Tank work in the recruiting office at the Manning Center in Oxford, Miss. on Friday, August 24, 2018. (Bruce Newman)

Before he was officially Ole Miss’ coach, Matt Luke was already thinking about the lifeblood of every college football program. More specifically, he wondered who he wanted to help with his.

He didn’t have to think hard.

Luke called Tyler Siskey the day before he was introduced as the Rebels’ permanent coach back in November, but he had a specific reason for wanting his friend to join his staff in an administrative role. He had a plan to streamline the Rebels’ recruiting efforts and wanted Siskey to execute it.

Nearly six years after leaving Ole Miss, Siskey returned as associate athletics director of recruiting and brought a new operation with him.

It’s called the Shark Tank, which, with the approval of athletic director Ross Bjork, has helped increase the number of positions in the recruiting office from four when Siskey took over in February to nearly 20. Ten of those make up the Shark Tank, most of which are student assistants.

Sitting around a table in the middle of a newly constructed recruiting office in the Manning Center, members of the Shark Tank spend their day cutting up film and checking into academics as part of the vetting process for recruits nationwide. Siskey also has what he described as five “upper echelon” staffers who handle everything from transcripts to entering data into the recruiting server to setting up travel itineraries for assistant coaches during evaluations periods.

“We really started from ground zero as far as an organizational structure, and we’ve got everything in place right now,” Siskey said.

What’s the point of it all? Organization and efficiency, which Luke made clear to Siskey during that initial phone call. Not that Ole Miss has lacked in recruiting —  the Rebels have signed a top-30 recruiting class five of the last six years, according to 247Sports.com’s composite ratings — but Luke wanted a system in place that would save he and his staff time so more could be spent on the Rebels’ current players.

“I think you’ve got to be careful staying status quo,” Luke said. “We’ve done a good job recruiting, but you always want to look at ways to try to find a way to be better, grow and be innovative.

“I want it to be a very straight-line, structured approach, and he had a really, really good plan when we talked. It just worked out.”

There are 10 members of the Shark Tank because, like every FBS team, Ole Miss has 10 on-field assistants. Each specialist is paired with a coach and is responsible for knowing about every prospect in that coach’s recruiting territory as well as the coach if not better, which comes with some crossover that results in more thorough evaluations.

For example, if tight ends coach Maurice Harris is responsible for Memphis recruits and Ole Miss is interested in a quarterback in the area, both Harris and offensive coordinator Phil Longo would evaluate the recruit since Longo, who doubles as the quarterbacks coach, is responsible for any quarterback the Rebels recruit. With each coach’s specialist also helping with the evaluation, that’s twice as many people offering input before Luke decides whether to make the prospect a priority.

“You have so many sets of eyes that no kid gets missed, and that’s the biggest thing is that no one gets missed,” Siskey said. “Nobody falls through the cracks.”

That much consultation also allows coaches to filter through quicker and focus on the prospects that are genuinely interested and have the skill set to play in the SEC.

“I call it chasing rabbits, but you start chasing a defensive lineman from California and you’re wasting all this time, energy, effort and financial resources recruiting the guy and he then he really has no interest,” Siskey said. “When you’re able to cut that down to these are guys that are truly interested and guys that we’re interested in, you can really narrow your focus and go get those guys instead of recruiting an additional 200 kids.”

Siskey modeled the operation after what he saw during his two years as a player personnel director at Alabama, where Siskey likened Nick Saban’s recruiting office to an NFL personnel department. Siskey got his first real shot to head up recruiting during his first stint at Ole Miss when Hugh Freeze brought Siskey with him from Arkansas State in 2012 to be coordinator of recruiting development.

Luke was the Rebels’ offensive line coach at the time but had known Siskey since his days as a high school assistant in Alabama. The two first met when Luke, then an assistant at Tennessee, was recruiting some of Siskey’s players at Mobile’s St. Paul’s Episcopal in 2006.

“I like to hire guys that I know and have a relationship with, but when a recruiting guy has been an on-the-field coach and kind of knows what’s to be expected, that’s good,” Luke said. “But he also left here and went to Alabama and got some valuable experience there. I just thought it was kind of a fit for me.”

The Rebels are on track to sign another strong recruiting class. Ole Miss’ 26 commitments for the 2019 recruiting cycle rank 17th nationally in the 247Sports composite, which Siskey would like to think has something to do with the Rebels’ overhauled approach.

“I think you’re starting to see the fruits of the labor,” Siskey said.