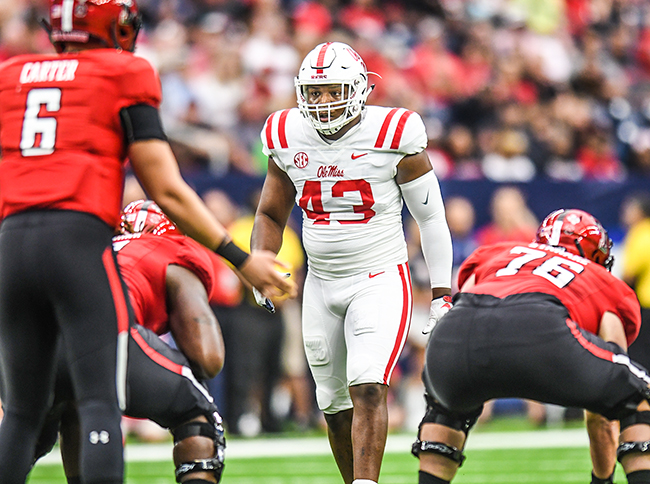 He could’ve sulked. He could’ve pouted. At this point in his career, he could’ve disengaged.

A senior who’s going through his third year in Ole Miss’ program and second in coordinator Wesley McGriff’s defense, Bing-Dukes began the preseason as the most experienced linebacker on the roster with ideas of finally anchoring the defense in the middle. But the speed and athleticism of some of the Rebels’ younger linebackers won out, and Bing-Dukes, who made five starts last season, began the season backing up sophomore Mahomed Sanogo, who made his first career start last week in the Rebels’ 47-27 win over Texas Tech.

The demotion came with some natural disappointment, but with so much youth at the position — 60 percent of the five-man rotation is freshmen and sophomores — Bing-Dukes decided to be an example rather than a downer, something he said he picked up on last season from former walk-on Tayler Polk, who spent most of his career as a backup before starting over Bing-Dukes the last three games.

“I didn’t want them to see me being pissed off and showing them the wrong way to handle things,” Bing-Dukes said. “I wanted them to learn from me that even when they’re down, they still need to prepare like they’re starting every single week. That was the biggest thing.”

That approach paid off last week when an injury forced Bing-Dukes into significantly more reps than he thought he would get against Tech’s pass-happy offense, a scenario linebackers coach Jon Sumrall said he prepared for by repping Bing-Dukes more in practice the previous week. Once freshman Kevontae’ Ruggs left in the second quarter after taking a blow to the head, Sanogo slid to Ruggs’ spot on the outside and Bing-Dukes took over in the middle.

Consistently being able to get the defense lined up and being able to make plays in space are admittedly the weak spots in Bing-Dukes’ game, though Sumrall said he was pleasantly surprised with what the 6-foot-1, 243-pounder was able to do last week when isolated in one-on-one matchups.

“His MO is probably a B gap-to-B gap, old-school, midwest Mike linebacker,” Sumrall said. “That’s his body type and his game, but he did a good job in space Saturday. I was really pleased with that.”

The game Ole Miss is about to play against Southern Illinois on Saturday is more tailored to Bing-Dukes’ skill set. The Salukis, who run a more pro-style offense, ran 65 times last week in a 49-10 win over Murray State.

Ruggs didn’t practice Tuesday as he continues to go through concussion protocol. He’ll have to clear that before he can play again, leaving his status uncertain heading into the weekend.

Whatever his role is going forward, Bing-Dukes is staying ready.

“Once he got demoted, the best thing I can say about him is his attitude was not bitter,” Sumrall said. “He didn’t pout. Didn’t mope. He supported the guys in the room around him that were getting the reps he wanted to be getting, and that’s all you can ask of the guy is be a team player. Everything we do is going to be in the best interest of our football team, and he understood that and handled it the right way.”