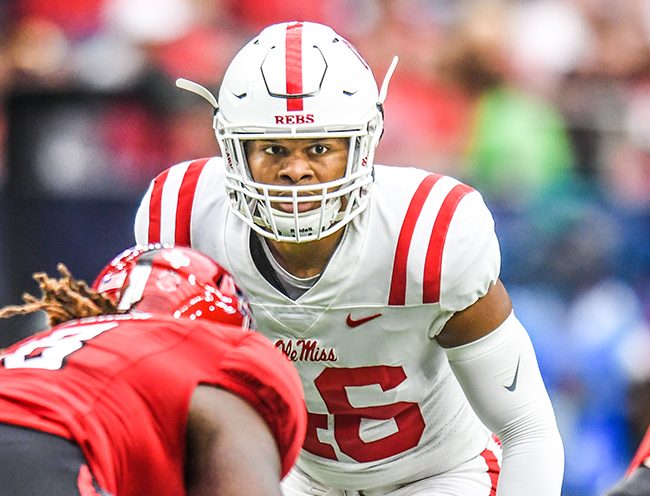 Matt Luke is hopeful he’ll have his most athletic linebacker on the field this week, but Ole Miss is formulating a Plan B just in case.

Kevontae’ Ruggs’ collegiate debut lasted less than a half after the freshman suffered a blow to the head in the Rebels’ 47-27 season-opening win over Texas Tech. Ruggs, who made his first tackle on the opening kickoff and had another before leaving in the second quarter, is going through concussion protocol this week, leaving him questionable for Ole Miss’ home opener against Southern Illinois on Saturday (3 p.m., SEC Network alternate).

Should the 6-foot-4, 190-pounder not be able to go, defensive coordinator Wesley McGriff said he’ll look at bumping Mohamed Sanogo to the outside and starting Detric Bing-Dukes in the middle. Sanogo took most of the reps on the outside once Ruggs left last week’s game, finishing with five tackles and one for loss in his first career start.

“(Sanogo) is real strong of terms of knowing the defense. Very knowledgeable,” McGriff said. “It was good to see him play well.”

The starter at middle linebacker heading into preseason camp, Bing-Dukes finished with four tackles off the bench and has stayed ready despite his demotion on the depth chart when it would’ve been easy for the senior not to. He’s made eight career starts for the Rebels.

“A lot of times when guys’ roles have been reduced, they tend to pout and you can see it visually,” McGriff said. “But that young man continued to work. He has a done tremendous job himself of staying locked in and staying positive. He played great in the game Saturday, which also gives me a lot of encouragement to plug him in and let’s go.”

But Ole Miss (1-0) will keep a rotation going in the middle if Ruggs is unavailable. Sanogo could slide back inside in certain packages while Willie Hibler and freshman Jacquez Jones, who debuted with four tackles, are likely to get more reps. Redshirt freshman Zikerrion Baker didn’t play last week, though Luke said he’d like to get more youngsters on the field Saturday against the FCS member Salukis (1-0) if the opportunity presents itself.

Southern Illinois will test the Rebels with one of the FCS’s top rushing attacks. The Salukis churned out 295 yards on the ground in their 49-10 rout of Murray State last week. Ole Miss allowed 164 yards and more than 4 yards per carry to Texas Tech.

Luke plans on having as many healthy hands on deck as possible at the second level of his defense to help.

“I just think you’ll see all four of those guys,” Luke said. “If one guy goes down, we’ll have to step up. But hopefully we’ll get Kevontae’ back, too.”