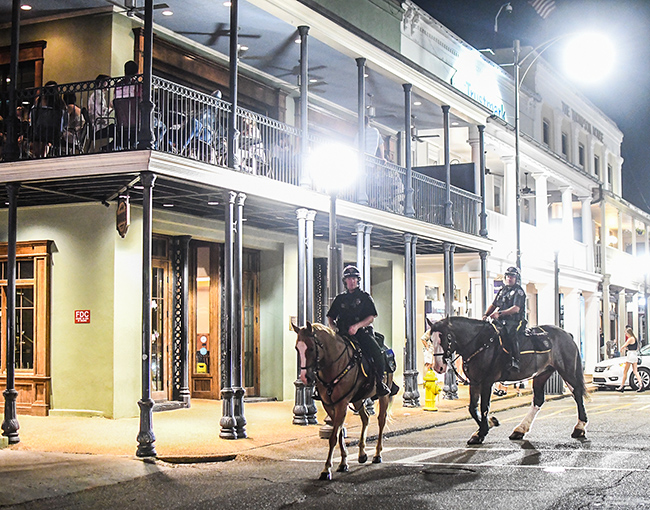 The Oxford Mounted Patrol works on the Square in Oxford, Miss. on Thursday, August 23, 2018.

The Oxford Board of Aldermen voted unanimously to pass what was formerly known as the Downtown District Ordinance on Tuesday, following four months of discussion.

Businesses in the Downtown District, defined by Oxford Police Chief Joey East as those between Four Corners and Lindsey’s Chevron stations, and between the intersections of North Lamar Boulevard and Jefferson Avenue and University Avenue and South Lamar, will see implementation of the ordinance 30 days from now on Oct. 4, as required by state law.

Businesses outside of the Downtown District and inside city limits will see implementation of the ordinance on Jan. 1, 2019. The ordinance has seen more than 20 hours of public discussion, something Mayor Robyn Tannehill said was beneficial to its final draft.

“I don’t believe there are any sections of this ordinance that remain in their original format. Every section has been modified in some way, based on months of public input,” Tannehill said. “These changes have ranged from reduced security requirements, which is now left primarily in the hands of bar and restaurant owners, to reduced notification requirements and the removal of a monetary charge.”

Oxford city attorney Pope Mallette addressed the board and members of the public, reading through each of the final changes to the ordinance, particularly as it pertains to surveillance cameras in bars and restaurants. Aldermen Rick Addy and Janice Antonow also made statements, explaining that their research showed the required cameras could cost as low as $350, and required ID verification apps cost less than $50. Because of this, they determined, those points of the ordinance would not lead to a significant cost for business owners.

Antonow ultimately made the motion, which was met with no opposition from the board. After the ordinance was passed, East addressed the audience and explained the reasons an ordinance like this was necessary.

“Since August 15, roughly when the students came back, we’ve made over 174 charges. I won’t confuse charges and arrests, because those could be multiple charges on one arrest, such as fake ID and a public drunk. Of those 174 charges, 82 of them were on the Square,” East said. “I’d say, roughly that 95 percent of these are alcohol related, everything from MIPs (minor in possession), fake IDs, DUI, furnishing to minors, drunk and disorderly, disturbing the peace and assault.”

OPD is also investigating two sexual assaults reported to have taken place in two separate businesses on the Square. In one business, East said, security cameras captured the incident and the business is working with the department to identify the attacker. The other business, however, had security cameras that were broken. East stated that this isn’t the first time this particular business has run into camera troubles, but that having regulations like those outlined in the ordinance would make the investigation run more smoothly.

Worst of all, East said, was a report the department received at 1 a.m. Tuesday of a 19-year-old who presumably used a fake ID to enter a Square establishment, got alcohol poisoning and is now fighting for their life in the ICU.

These occurrences are all too common, East said, stressing that the best way to prevent them is through a “partnership.” However, he said he’s seen the opposite of partnership over the last four months.

When addressing the April shooting at The Lyric Oxford, East said he took personal offense to allegations of racial bias in the department’s investigation and the presentation of the ordinance.

Instead, he said, there were lapses in security that could have prevented the incident. According to East, investigators asked questions like, “Who is monitoring occupancy? Who is watching the back door?” Those questions went unanswered, he said before clarifying the sequence of events on the night of the Lyric incident.

First of all, he said, the shooter was on the VIP list for the event and came in through the back door – something the department’s cameras, not The Lyric’s, revealed.

“A fight broke out, the person shot. That person’s, who is currently charged with aggravated assault, statement to us was, ‘Yes, I pulled out a gun, yes I did shoot, because security of that establishment was attacking and assaulting a friend of mine,’” East said. “Video surveillance shows that. How was that video surveillance taken? Because a bartender in the (building) took out their cell phone, and I quote from their statement, ‘I decided to film the fight with my iPhone in case we needed video of what was happening.’ That is their words, not mine.”

It’s this exact type of situation, East said, that the City of Oxford and OPD are hoping to avoid. However, he stressed that this wouldn’t be possible without support.

“We made these recommendations based on what we felt like you as a city should do, what we as a department should do and what business owners should do together – a partnership,” East said. “I believe in my heart and with everything I have, if we don’t work together to establish this partnership, it’s not going to work.”