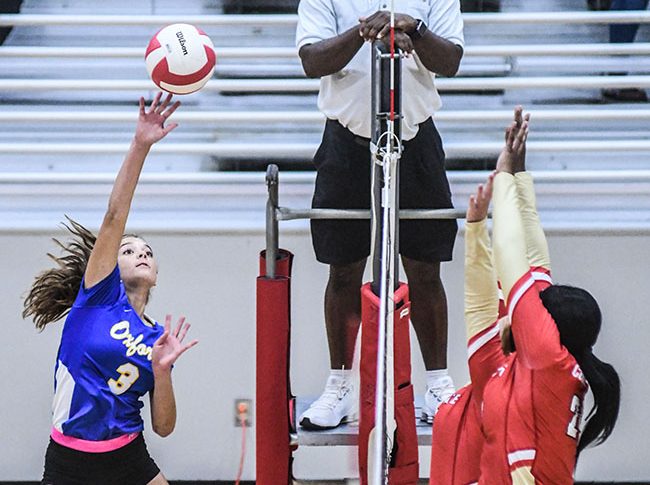 The Crosstown Classic is on Friday, but the spirit of the rivalry was felt a bit early on the volleyball court. In a makeup match from their postponed season opener on Aug. 6, Oxford swept Lafayette 3-0 (26-24, 25-22, 25-10) inside the LHS gym on Wednesday.

It was also a bounceback win for the Chargers, who were coming off a 3-0 defeat at DeSoto Central on Tuesday.

“We just passed really well and we served really well. We were really scrappy,” Oxford head coach Kacie Hengler said. “We picked up a lot of balls that normally would’ve hit the floor. So we needed that tonight. … We were really defeated (Tuesday) coming off of that. I was hard on them after the game and told them it’s got to change or the season’s just going to keep going this way. I’m glad they took that to heart.”

The first two sets were as competitive and as close as they could be with a near 30-minute opening set going back and forth before Oxford edged out the early 1-0 advantage. The second set continued the see-saw battle until the Chargers (5-8) used a 5-2 rally to clinch the frame.

The third set was not as competitive as the opening two with Oxford jumping out to a 15-8 lead before outscoring Lafayette (5-5) 10-2 to close out the match.

“I felt like we played very well and felt like we let two (sets) get away,” Lafayette head coach Clint Jordan said. “We let (Oxford) take them away from us and in that third set you could just kind of see. We just kind of laid down and were upset about the other two and didn’t let it go. When you do that, you get beat in this game.”

Oxford’s Grace Freeman, Kelsey Wilborn and Lauren Sink led the team with four kills each. Maggie Sudduth had a team-best five digs for the Chargers.

“We usually have Katy who is one of our outside hitters and she wasn’t here tonight and I wasn’t sure how that was going to work out,” Hengler said. “Grace is one of our freshmen and she really stepped up tonight and took care of what she needed to do.”

The Commodores stay home with a Region 4-Class II match against Amory on Thursday while Oxford stays on the road with a Region 2-Class III match at Columbus.

Why Ole Miss’ big-play offense has potential to be…