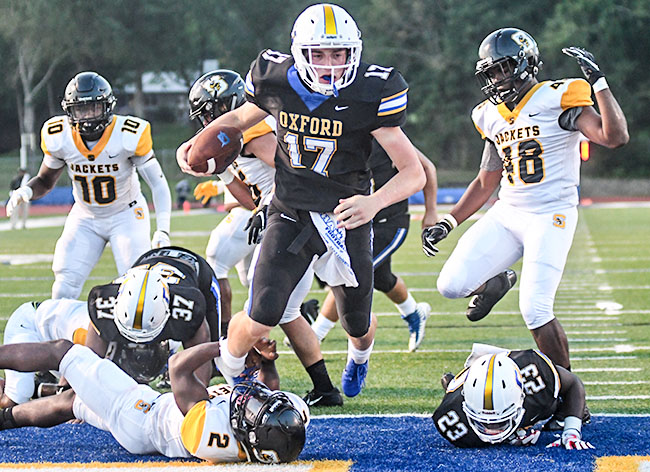 Oxford High's John Meagher (17) runs through the tackle attempt by Starkville High's Zitavious Williams (2) to score in the second quarter at Bobby Holcomb Field in Oxford, Miss. on Friday, August 24, 2018.

Oxford gathered momentum last week to potentially turn their season around after a bumpy start. If they want to keep this newfound momentum, they will have to get past a rival to do it.

The Chargers host Lafayette in the 2018 edition of the Crosstown Classic on Friday (7 p.m., 105.1/95.5 FM) and have the task of trying to hand the Commodores their first loss of the season.

In last week’s 39-0 win over Grenada, Oxford (1-1) had a solid showing from their defense, creating seven turnovers. Several of the takeaways helped create scoring opportunities.

“Forcing seven turnovers is a huge, huge deal,” Oxford head coach Chris Cutcliffe said. “That’s something we emphasize in practice every day is forcing turnovers defensively and holding onto the ball offensively. That was huge to see. We made a big improvement in tackling from the Starkville game to the Grenada game and that was good to see, too.”

After getting punched in the mouth by No. 1 Starkville, the Chargers will have another potent offense to contend with in Lafayette (3-0). The Commodores are averaging 40.7 points a game with most of the damage coming on the ground.

The combination of Jamie Shaw and Lance Stewart has produced nine of Lafayette’s 14 rushing touchdowns.

“We have a lot of guys playing on defense for the first time, so I hope to continue to see that improvement week to week,” Cutcliffe said. “I see a (Lafayette team) that returns a lot of starters on both sides of the ball and they have a physical running game on offense. It’s definitely a big challenge.”

In what could prove vital to the game on Friday, Oxford had success against Grenada in short-field situations. In six drives that made to the red zone, Oxford’s offense cashed in four of them.
Quarterback John Meagher threw for 144 yards and two touchdowns paired with a run game that rushed for 100 yards and scored two touchdowns, both coming from J.J. Pegues.

The Chargers will need to rely on Pegues heavily against a Commodore defense that has been stingy in giving out points to their opponents and averaging 14 points allowed per game.

“Red-zone offense and red-zone defense are (big factors in wins and losses),” Cutcliffe said. “I felt like we did a pretty good job but still felt like we left a few points on the board. Those are things we can still continue to improve on is scoring 100 percent of the time in the red zone.”