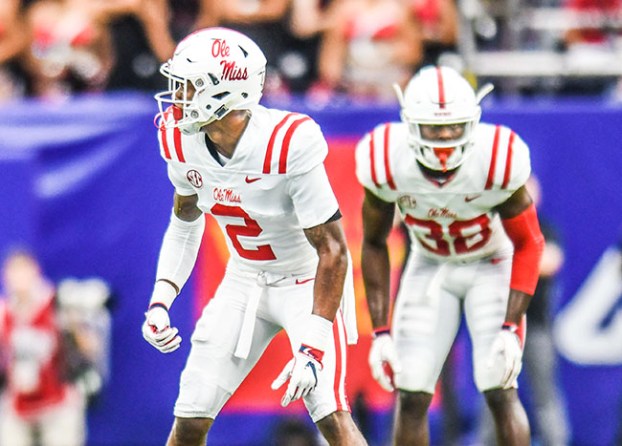 In a secondary stockpiled with experienced contributors, Montrell Custis looked like he belonged.

Manning the Star position, a cross between a safety and a linebacker in Ole Miss defensive coordinator Wesley’s McGriff’s 4-2-5 scheme, Custis often found himself around the ball in the Rebels’ 47-27 win over Texas Tech last week. The 6-foot, 173-pounder finished with a career-high seven tackles and had a game-high four pass breakups, including a pair of fourth-down deflections in the end zone that prevented the Red Raiders from cutting into the lead late.

Custis was modest in his assessment of the way he played, referring to his performance as “OK.”

“I could’ve made a couple plays and could’ve helped the team more,” he added.

It’s the kind of opportunity that’s been a long time coming for the fourth-year junior.

It was the first career start for Custis, who redshirted in 2015 before spending the next two seasons as a backup to Tony Conner and A.J. Moore when he wasn’t contributing on special teams. Moore ran out of eligibility after last season, but Custis had more competition for a starting job from junior college signee Vernon Dasher, a more prototypical 6-0, 203-pound body type that Ole Miss’ coaches targeted specifically in the junior college ranks to contribute immediately.

Dasher held the edge coming out of the spring and was listed atop the depth chart at the position heading into preseason camp, which got Custis’ attention. The competition went back and forth as the two split first-team reps before Dasher suffered a groin injury that limited him for part of camp.

Custis is ahead for now, though both played Saturday. Dasher finished with five tackles at a position where the friendly competition will continue to play out.

“He actually upped my game to make me play better,” Custis said. “We’re out there like a two-headed monster, we like to say.”

Waiting it out isn’t something most upperclassmen are willing to do with time running out on their eligibility clock, but Custis wanted to stay at Ole Miss even if it didn’t include being the first one on the field. With Moore, DeMarquis Gates, Marquis Haynes, Breeland Speaks and other recognizable defensive faces no longer around, he knew he had a role.

“I just always looked at them guys,” Custis said. “Hopefully I can just imitate them and push leadership throughout the team. That’s what I’m trying to do.”

Coaches first began seeing a change in Custis’ mental approach in the preseason when he went to head coach Matt Luke offering to change his jersey number. Custis, who now wears No. 2, shared No. 25 with senior running back D.K. Buford at the beginning of camp, but NCAA rules don’t allow teammates with the same number to be on the field at the same time, which would’ve presented a problem since Custis and Buford both play special teams.

“He has really grown up a lot,” Luke said. “I kind of made a big deal about him changing his number to be on special teams. It just goes to show how much he has grown up as a person but also the way he prepared.”

Said Custis, “(Buford) was a fifth-year senior, so in my mind, I already knew that’s his number. And I always wanted No. 2. That was my mindset in the back of my mind. I’d do anything to help the team out.”

And Custis means anything.

Oxford gathered momentum last week to potentially turn their season around after a bumpy start. If they want to keep... read more