Yoga for a Cause: donation-based class to benefit My Ole Miss Wish 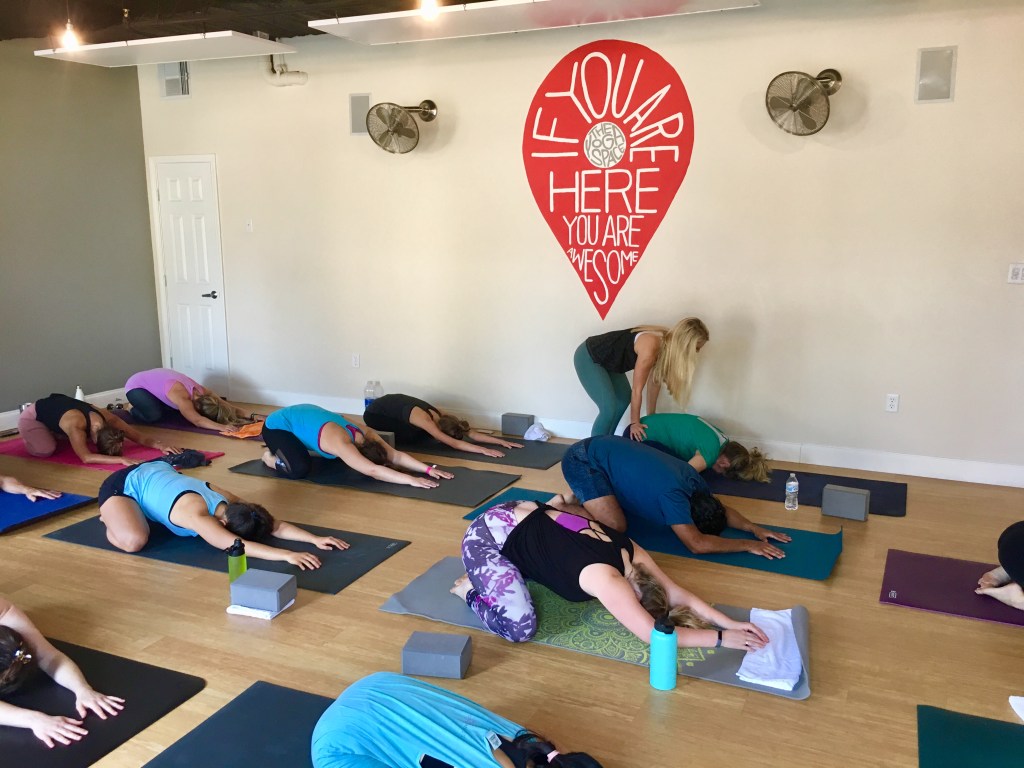 Anna Koehler, one of the instructors for the donation-based class at The Yoga Space, guides a student through their practice. Yoga for a Cause classes are held on Sundays from 3 to 4 p.m.

Oxford’s newest hot yoga studio, The Yoga Space, is spending part of its weekends giving back to the community through its donation-based class on Sundays from 3 to 4 p.m.

The Yoga for a Cause class is the studio’s signature Power Flow heated class, but instead of paying for an individual class or purchasing a membership package, students can attend the class in exchange for a donation of their choosing. From now through January 2019, all donations collected will benefit My Ole Miss Wish, a program of the Ole Miss Student Veterans Association that grants wishes for terminally ill children of servicemembers.

Mary Morgan Bryan, who owns The Yoga Space, said the decision to support My Ole Miss Wish was twofold. In addition to raising awareness for a worthy cause, Bryan said she also hopes to encourage more veterans and others who can benefit from a routine yoga practice. So far, she said, this donation cycle has been the studio’s most successful one to date in terms of attendance.

“I feel like this class continues to grow. Each week, there are more people in there, which is really exciting to see,” Bryan said. “Particularly with this cause, there seems to be a lot of people behind it. It’s nice to see so many people supporting something related to veterans.”

Yoga is beneficial in terms of being present-minded and gaining control of breath and movements, Bryan said, as well as calming the fight-or-flight nervous response many people experience in stressful situations.

Yoga also offers a chance to begin to abandon dissociative tendencies and productively process experiences of daily life, she said.

“Yoga’s kind of like a moving meditation, when you think about the Asana practice,” Bryan said. “It’s giving people a chance to come into the present moment, because all we’ve got is the present moment but we tend to get stuck in the past or stuck thinking about what’s going to happen.”

Lauren Graham is a U.S. Navy veteran, an officer in the Ole Miss SVA and a self-described yoga devotee. As someone who attends several classes a week, Graham said the chance to combine the things she’s most passionate about is a dream come true.

Graham also said she’s really enjoying the chance to share her love of yoga with fellow veterans. Because she’s seen the positive benefits in her life, she said she wants to give more people the chance to reap the same reward.

“It’s surprising, because most people think a yoga class is going to be a generic thing, but then they go in and it’s actually really hard – but they love it,” Graham said. “It kind of breaks down stereotypes, which is something I feel like we, as veterans, have to do, too.”

This year’s My Ole Miss Wish recipient is a little boy with leukemia whose father is an Air Force chaplain. Donations from the Sunday class will go toward financing an extra-special part of the child’s wish, Graham said.

“If someone goes to the class and donates, they’re going to know it’s all going to directly benefit this child. And then in the future, we’ll be able to help more kids,” Graham said. “It’s really special, because these aren’t just children who are sick with cancer – they’re children that are in our military family.”

To learn more or sign up for a class, visit http://theyogaspaceoxford.com.