Dixie Cups: Trash Can Friday is back again 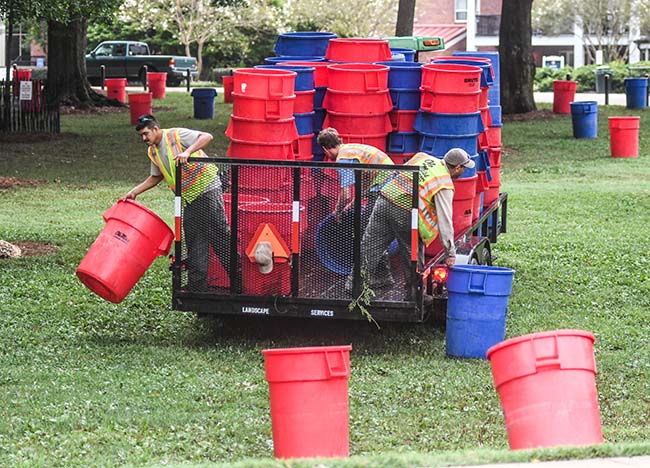 Few things bring a twinkle to the eye of every Rebel football fan like Trash Can Fridays, the official calling card of game day.

However, many revelers don’t realize the work that goes into splashing the Grove with the first bits of red and blue every home game weekend. Nathan Lazinsky, Assistant Superintendent of Landscape Services for the university, said his office has spent months planning for football season.

Known to landscape services workers as “Dixie Cups,” Lazinsky said the red and blue barrels are but one part of the University’s mission to continue providing one of the most award-winning tailgate experiences in college football.

“It means football’s here. Our staff gets excited about it, too,” Lazinsky said. “I guess you could sit around and complain about it, but we see people tweeting about it and that kind of stuff and it makes us feel good, because people are appreciating the hard work we’re putting into it.”

That hard work begins at 3 a.m. on Fridays, when a crew of nine workers descends upon campus. One worker gets behind the wheel of the University’s sweeper truck, one follows with an industrial blower and one blocks traffic. The remaining six spend the next three hours setting out the plywood that acts as a base for the 20-yard roll-off dumpsters that line the street leading up to the Lyceum.

The rest of the staff comes in at 6 a.m., and spends about two-and-a-half hours setting up 2,300 trash cans and 300 recycling bins across campus.

After the game ends and crowds evacuate the Grove, Lazinsky and his crew will return at approximately 10 p.m. Armed with a host of volunteers, the group will pull off what some call the most impressive magic trick in the SEC – setting campus back to right. By Sunday morning, there will be no trace of Saturday’s party.

“A lot of our alumni and donors are going to make a victory loop before they leave town (on Sunday),” Lazinsky said. “So we want to make sure it looks like it never happened.”

Some weekend feats are more impressive than others, Lazinsky said. When the Rebels are winning, the crowds are larger and the messes are bigger, he said.

Before they’re put through the ringer on Saturday, the red and blue trash cans are a placeholder, a reminder of good times and, as one fan said, the marker of the “most wonderful time of the year.”

“Whenever Trash Can Fridays roll around, it’s like the whole mood on campus has shifted,” Grace Morris, a junior at the University, said. “It’s a reminder that, yes we’re here to get an education, but we’re also here to enjoy… all the things we love about Ole Miss and Rebel football.”