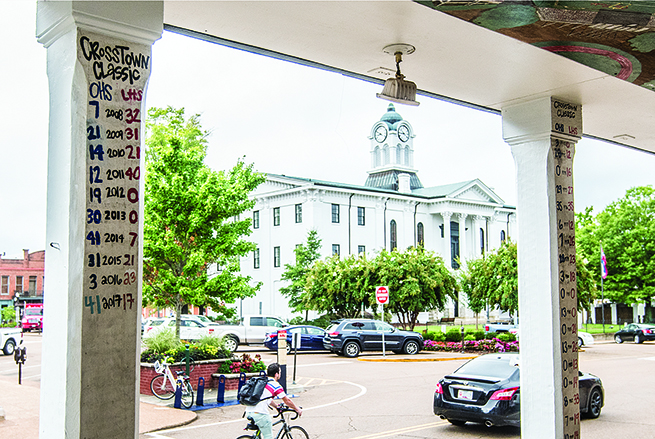 The scores of Lafayette High vs. Oxford High games are painted on the columns of University Sporting Goods, in Oxford, Miss. on Thursday, September 6, 2018.

Bo Freeman was driving in her car down Lamar Ave. when she came across a sign that would help birth what is the Crosstown Classic. Freeman, the president of the Oxford Booster Club at the time, was trying to come up with a name for the annual football game against rivals Oxford and Lafayette.

Wanting to avoid using the word ‘rivalry,’ Freeman was racking her brain for a name that wasn’t so cliché.

“We were trying to come up with an idea, because it’s always a special game, to call it something,” Freeman recalled. “I was just driving on North Lamar in front of Midtown Shopping Center and when I saw midtown it made me think of crosstown. I thought, ‘Crosstown Classic, that sounds good.’”

Freeman was worried using that the word ‘classic’ would make it sound more like a golf tournament than a football game, but the name stuck.

This year marks the 48th meeting between the two teams, dating back to 1973, but only since the early 1990s has there been a name associated with the game.

With almost 25 years of the ‘Crosstown Classic,’ the game has only grown to mean more to the two schools and the citizens of Oxford and Lafayette County. Since the mid-1980s, the scores of each contest have been kept on the columns in front of University Sporting Goods, located on the Square.

It was former Oxford mayor Pat Patterson who came up with the idea to post the scores of each contest in the public eye.

“I had gotten the scores and saved them over the years and we just started painting the scores up there every year,” Patterson said. “We went back and caught all (the scores) up and every three years or so we have to go back and re-paint them. We get calls every year, as soon as that game is over asking ‘when are you going to paint the score?’”

The scores are located on the backside of the columns facing the storefront, but for members of the community who know where to look, they hold a special place in the history of the rivalry. That includes Oxford head coach Chris Cutcliffe who is participating in his 12th ‘Crosstown Classic’ as either a player or a coach.

“I think it’s really cool,” Cutcliffe said. “My kids like to go to it and mark their height. They don’t really get it completely, but they’ll go stand on it and see how tall they are and what score matches their height. I always see a lot of people on the Square check it out. …I think it’s pretty unique how close the schools are, for sure. You grow up playing with your teammates from your community your whole life and then you compete against those guys and get to do it on the biggest stage there is.”