Lafayette has final tune up before region play with Crosstown Classic 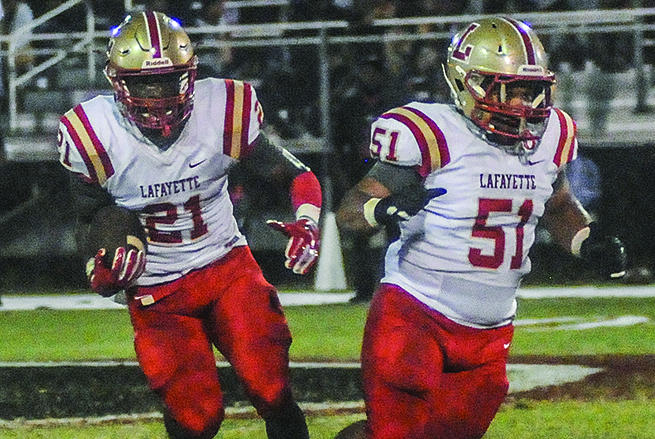 This week is an important one for Lafayette.

Yes, it is the ‘Crosstown Classic’ game against rival Oxford, but it is also the final dress rehearsal for the Commodores before region play begins in two weeks. After Friday’s game, Lafayette (3-0) is off before traveling to No. 4 West Point to open up their Region 1-5A schedule on Sept. 21.

“It’s extremely important to us to see kind of where we are and if the things we’ve been working on on a weekly basis in practice are really being put to use on Friday nights,” Lafayette head coach Michael Fair said. “We’ve had a lot of film over the last three weeks, or four with the jamboree, to kind of evaluate some positions and some personnel and do some things and stay true to our fundamentals. Hopefully we’re improving, so we’ll see this week.”

This is Fair’s third time coaching in the annual game with their in-town rival and is 1-1 so far. The past two seasons have seen the visiting team celebrating with the ‘University Sporting Goods Crosstown Classic’ trophy as the home team has had to stand on the sideline and watch.

In 2016, Lafayette defeated Oxford (1-1) 23-3 and sparked a 13-game winning streak all the way to the MHSAA Class 4A state championship. Last year, Oxford got their revenge with a 41-17 win at William L. Buford Stadium.

“It’s important and I don’t know if you can understand how important it is until you’ve coached in one of them,” Fair said. “It’s a lot of fun. You never have to talk to your kids about playing hard in this game. If you got a really good football team, you don’t have to do that a whole lot, but this week you don’t have to worry about it. Motivation won’t be an issue on either side. (Oxford) is going to play us very, very hard and we’re going give them everything we’ve got.”

The Chargers are coming off a strong defensive performance versus Grenada last Friday with seven takeaways in the game. Oxford’s run defense also showed up, slowing the Chargers down for 138 yards and zero touchdowns.

The run game will be another obstacle this week with the potent attack Lafayette presents and the Chargers will try and slow down the biggest threat of the Commodores’ offense.
“(Oxford) is very improved from week-to-week,” Fair said. “They’re doing very well against the run. They were stuffing Grenada last week, so it poses a big challenge for us because that’s one of the things that we like to do.”