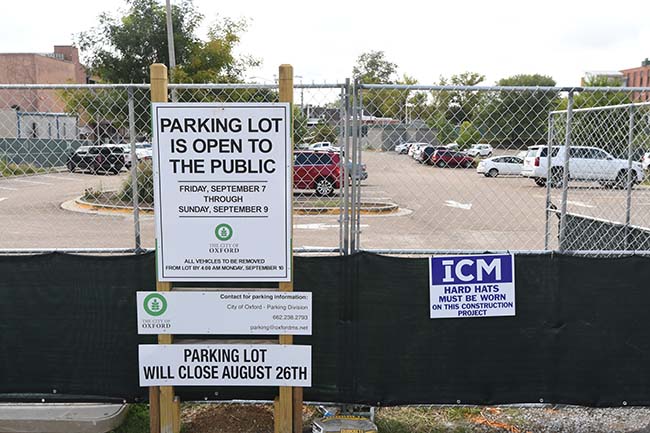 The parking lot where the new parking garage will be located, which was closed on August 26, is reopened in Oxford, Miss. on Friday, September 7, 2018. The lot will be open until further notice, Mayor Robyn Tannehill, stated at a Parking Commission meeting Friday morning. (Bruce Newman, Oxford Eagle via AP)

The Oxford Square North parking lot, future home of the Oxford Parking Garage, is open “for the foreseeable future” after closing for construction on Aug. 26.

On Thursday, the City of Oxford posted on social media that they made the choice to reopen the lot in honor of the first Ole Miss home football game this weekend. However, a meeting of the Downtown Parking Commission Friday morning revealed there was more to the closure than team spirit.

“Shaw has, up to this point, been unable to secure a payment performance bond,” Robinson said. “At this point, it’s not a definite no that they can’t get bonded, but I will say my optimism is declining.”

Shaw Services is also working on the Oxford Activity Center, and according to Mayor Robyn Tannehill, the City’s had “positive experiences” with them on other projects.

Brian Clanton, vice president of Marketing and Finance at Shaw Services, said the performance bond could be approved “any day now.”

Currently, the project is two weeks behind schedule, something Robinson and Casey Rogers, of Innovative Construction Management, said they’d actively tried to avoid. While the delay is a good time to complete paperwork, Rogers said, two more weeks of delay will impact work schedules and material lead time. If that happens, the year-long project could lead to parking complications next football season, Robinson said.

The City went back and forth on reopening the parking lot, Robinson said, before ultimately deciding after Tuesday’s Board of Aldermen meeting that, if the bond was not secured by Thursday, they would reopen the lot and not close it again until the bond is secured.

When that will be, however, is a mystery. According to Tannehill, the lot could be closed as early as Monday or remain open for a couple weeks or longer.

“We decided (Thursday) that, if they couldn’t get it secured by noon, then we’d start taking fencing down,” Tannehill said. “There’s no reason to have fencing up when there’s nothing going on and we’ve got a game weekend.”