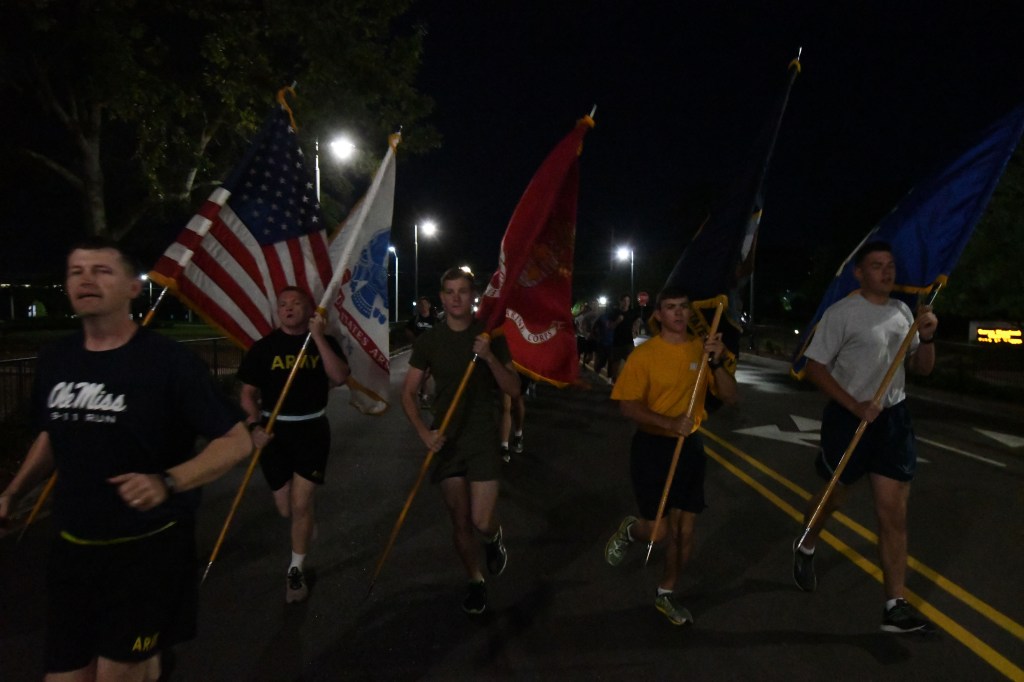 University of Mississippi 9/11 Memorial Run in Oxford, Miss. on Monday, September 11, 2017. The two mile run went from the the Lyceum to the Lafayette County Courthouse and back.

The University of Mississippi ROTC programs will host the annual 9/11 Memorial Run this Saturday at 6:45 a.m.

It’s been 17 years since the Sept. 11, 2001 terrorist attacks on the United States shocked the nation and the world and changed the lives of millions of Americans. Nearly 3,000 people lost their lives in the attacks on the twin towers of the World Trade Center in New York City and the Pentagon in Washington, D.C.

The run, which is in remembrance of the victims and first responders who came to their aid, begins in front of the Lyceum and continues to the Oxford Square and back.

All local first responders and the public are invited to the run, which is open to anyone who wants to either participate or show their support by encouraging the runners. Scott Caldwell, recruiting operations officer for UM Army ROTC, said he looks forward to this year’s run being the biggest and best yet.

“The 9/11 Memorial Run continues to grow each year with more student organizations,” Caldwell said in a recent news release. “Last year, we had members of the Ole Miss Rebelettes and increased fraternity, sorority and Oxford community participation.”

The university’s Army, Navy, Marine Corps and Air Force ROTC programs host the event each year. Ole Miss is one of the nation’s few universities to have all four branches of military service represented on campus, according to a statement from the University.

Because the 9/11 Memorial Run coincides with the first home football game of the season, the route for the event will be different from previous years.

The run will begin at the Lyceum and run around the Square as usual, but instead of ending at the Grove, runners will return to the Lyceum. Organizers are also asking participants to park at the Jackson Avenue Center by 6 a.m. so they can be shuttled at 6:30 to Paris Yates Chapel.

Dixie Cups: Trash Can Friday is back again