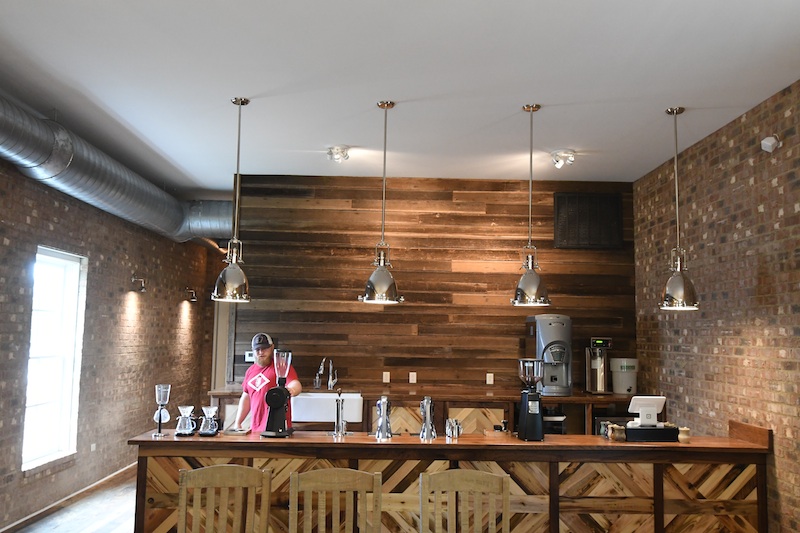 Josh Fought is the barista at Lost Dog Coffee Shop in Taylor, Miss. on Thursday, Sept. 6, 2018. The new coffee shop in Plein Air will open on Saturday.

The brainchild of Plein Air founder Campbell McCool, Cups owner Brian Spillman and expert barista Josh Faught, Lost Dog is hosting a soft opening this Saturday, Sept. 8 before it officially opens its doors on Sept. 15. According to McCool, bringing a coffee shop to the seven-acre Plein Air commercial district was always in the works – he just needed the right people to fulfill the dream.

“A coffee shop is something that we’ve been planning for awhile, kind of as a next step after Grit opened two years ago,” McCool said. “We were looking for someone to run it. … Thank God I ran into Brian, because that’s exactly what he does.”

Spillman and his wife Camille took over ownership of Cups coffee shop about a year ago, but he and Faught were looking for a space that was completely their own, Spillman said. Once they went out to Taylor and saw the space that would become Lost Dog, both Faught and Spillman said it met all the requirements of their dream coffee shop.

The trio paid attention to detail when it came to creating the space, literally from the floorboards up, McCool said. The worn pine floorboards are from an old warehouse in Sylacauga, Ala., and the furniture is either vintage finds or designed by local woodworker Obie Clark. The back bar, which features alternating shades of hardwood and a signature branding in the corner, is a product of JJ’s Wood Shop, and Taylor’s own potter, Keith Stewart, hand-threw all of the coffee mugs.

One of the mugs, Faught said, was glazed with ashes from a cooking fire from Taylor Grocery.

“I love coffee shops, because people gather around each other, and there’s just this sense of community,” Spillman said. “With the brewing methods, and learning the difference in origin and roasts… there was a huge learning curve, but we have learned a lot in the past year. This is what I envision when I think of a coffee shop.”

However, Faught said the decor is just a vehicle to get customers to the main attraction: high-quality coffee. Lost Dog is one of the first shops in Mississippi to feature a Modbar AV espresso maker, an in-counter fixture that eliminates the need for the bulky espresso machines of yesteryear, he said.

A self-described coffee connoisseur, Faught said he and Spillman spent several months searching for a roasting company that not only created a quality product, but did so consistently.

“When it came to finding a roaster for (Lost Dog), I already had a pretty good idea of, ‘These people are not only really good, but also consistent,’ because that’s what I want,” Faught said. “What we did was, reach out to a bunch of roasters, and then narrowed it down to what’s blowing us away. We ended up going with Huckleberry, who’s based out of Denver. I think the people of Oxford are going to be able to come here and get coffee they’ve never tried before.”

Lost Dog Coffee’s soft opening will take place from 7 a.m. to 2 p.m. this Saturday, with free donuts courtesy of Shipley’s.