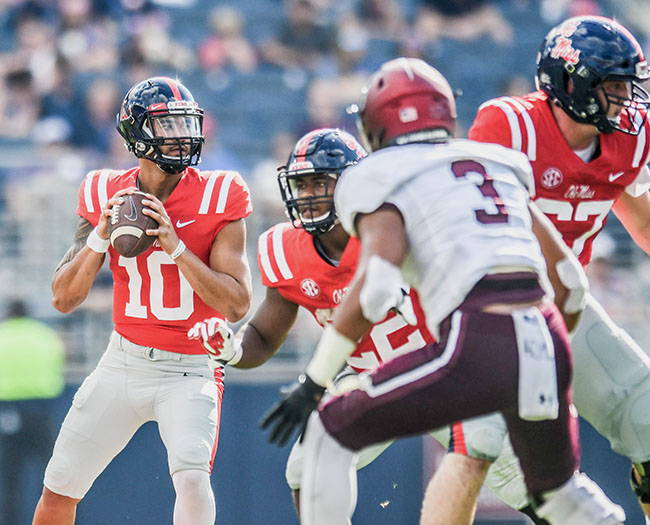 It sounds strange, but Ole Miss needed its offense to be every bit of its explosive self against an FCS defense Saturday.

Jordan Ta’amu and his receivers delivered.

The Rebels got more help than usual from the passing game, which resulted in a career day for Ole Miss’ senior quarterback. Ta’amu torched Southern Illinois for 446 passing yards and five touchdown passes while completing 70 percent of his attempts in the Rebels’ 76-41 win that was much closer than expected before an Ole Miss defense that yielded 629 yards produced two touchdowns of its own late.

Those totals surpassed Ta’amu’s previous bests of 418 yards and four scoring tosses set last season against Louisiana Lafayette and Kentucky, respectively. It helped the Rebels survive a scare from an SIU team that’s won a combined eight games the previous two seasons in the highest-scoring game in Ole Miss history.

“I just felt like we needed to go back out there and keep scoring,” Ta’amu said. “Our defense is going to come in and help us out a little bit, but that’s what (offensive coorindator Phil) Longo kept telling us what just to keep scoring, stay calm, stay collected and just do our job.”

With SIU also having to contend with a running game that produced 167 yards, including a game-high 107 on just 15 carries from Scottie Phillips, Ta’amu consistently took advantage of one-on-one matchups with his receivers all over the field to average 19.5 yards per completion.

A.J. Brown (game-high 158 yards, two TDs) and Braylon Sanders (133 yards, one TD) each had more than 100 receiving yards. DK Metcalf finished with 93 and a score, and freshman Elijah Moore hauled in a 50-yard score.

“We’re looking for matchups,” Longo said. “You’d like to have a matchup advantage or a schematic advantage, but the way the offense is built, sometimes you have both on a play and Jordan can take advantage of that.

“He did what we talk about doing all the time, and that was just taking what the defense gives you.”

His 5-yard toss to Metcalf late in the third quarter to begin a 34-0 run to end the game was the only touchdown pass that covered fewer than 30 yards.

“They were bringing down the safeties a lot and just giving us one-on-one targets. With our offense, one on one means they’re open. Just having those guys out there, I know they’re going to catch it.”

With SIU trying to land another counter punch in the back-and-forth contest, Ole Miss’ defense came up with a stop that also produced points to begin the fourth quarter.

Junior college transfer Vernon Dasher, playing just his second game for the Rebels, jumped in front of Sam Straub’s pass intended for running back Nate Strong and returned the interception 88 yards for his first career score that made it a 55-41 advantage for Ole Miss.

“(Dasher) stayed back,” said linebacker Mohamed Sanogo, who had a game-high 11 tackles. “We were in a coverage where he was sitting right there, and instead of running and going, he let the crosser come up on the backside and he stayed home. He made the play when the quarterback thought he was going to run.”

The Rebels, who had gone the first seven quarters of the season without creating a turnover, forced two more in the final 15 minutes, including a fumble that Victor Evans scooped and took 58 yards to the house as part of Ole Miss’ late surge.

“The first time we came out of the half, we were just trying to play at our standard,” Sanogo said. “Turnovers, interceptions, fumble recoveries, that’s our standard.”

The extended lead late in the fourth quarter allowed Ole Miss to get freshman quarterback Matt Corral in for his first collegiate snaps.

Corral, the highest-ranked recruit in Ole Miss’ signing class, threw two passes, completing one of them for 31 yards to Alex Weber to the Salukis’ 1-yard line. Corral kept the ball two plays later and scampered into the end zone to cap the scoring with his first career touchdown.

“He kept his emotions in check,” coach Matt Luke said. “That was maybe what I was worried about most, but I was proud of him. … Pleased for him to get in there, get his first action and happy he was able to lead the team down there for a touchdown.”

Linebacker Detric Bing-Dukes and defensive end Tariqious Tisdale limped off the field at one point while Luke said Phillips was also limping, but Luke didn’t have an update on their statuses after the game. … Ole Miss’ 76 points are fifth-most in school history and the most since the Rebels scored that many against Fresno State in 2015. … Ole Miss’ 629 yards are the sixth-most in program history. … Ole Miss scored two defensive touchdowns in a game for the first time since Fresno State in 2015.