Ole Miss’ defense not inspiring any confidence with No. 1 Alabama looming 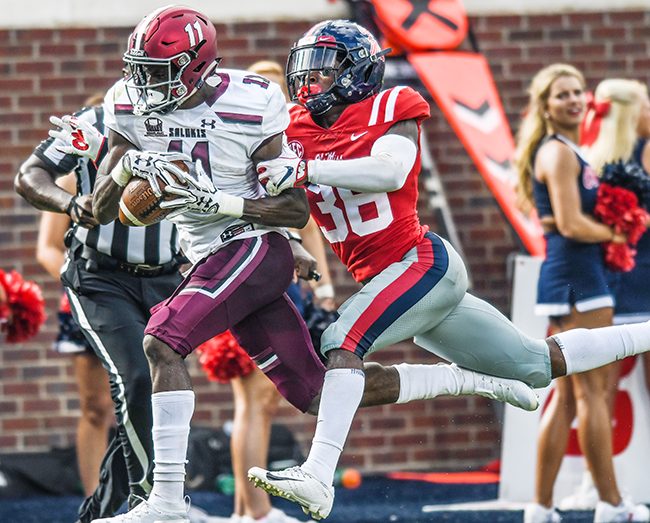 They rolled up 629 yards and found the end zone five times.

They had 181 of those yards before the first quarter was over and 386 of those by halftime. The quarterback threw for 382 yards and four touchdowns while their running backs ripped through open holes and arm tackles, averaging nearly 6 yards on their 45 carries.

They being Southern Illinois.

It’s a good thing for Ole Miss the offense overwhelmed the Salukis’ defense for 398 first-half yards, 646 total yards and nine touchdowns or the Rebels and their followers might be reliving those Jacksonville State nightmares of eight years ago tonight instead of breathing a collective sigh of relief following the Rebels’ 76-41 win Saturday at Vaught-Hemingway Stadium.

Ole Miss forced three turnovers in the fourth quarter and turned two of them directly into points, but that’s putting lipstick on a pig. Saturday’s performance was an all-too-familiar ugly one for the Rebels’ defense. And if we’re being honest, it was embarrassing.

It would be one thing if Ole Miss was outmatched from a physicality and talent standpoint like it’s been countless times the last couple of years, but the Rebels were the more gifted team Saturday. Ole Miss’ players were bigger, faster and stronger than its FCS counterpart that’s turned in back-to-back 4-8 seasons, yet it was SIU’s athletes that were running circles — or straight lines — past the Rebels.

SIU deserves some credit for its game plan. Ole Miss defensive coordinator Wesley McGriff harped throughout the week on honing in on the Salukis’ running game after SIU ran it 65 times a week ago against Murray State, but the Salukis opened with five consecutive passes and threw a ton of different formations at an Ole Miss defense that was caught off guard.

But it was well into the third quarter until Ole Miss was able to adjust to it. Until then, SIU’s receivers and backs ran wide open in the second and third levels of the defense. Communication and execution lacked. So did focus, something players and coaches admitted with No. 1 Alabama on the schedule next week.

There’s still an obvious talent issue on defense, a deficiency that still lingers from Hugh Freeze’s lack of recruiting on that side of the ball toward the end of his tenure. There’s no consistent pass rush, there’s not a lockdown corner with Jaylon Jones done for the season, and the linebackers are still largely void of speed and athleticism without freshman Kevontae’ Ruggs, who didn’t play Saturday after failing to clear concussion protocol.

But this isn’t just about a lack of high-caliber players. Not when those players are in the second year of the same system yet the reasons for the lack of production are seemingly on repeat: lack of communication, missed assignments, poor eye discipline, wrong fits.

Matt Luke didn’t hire McGriff but kept McGriff on his staff when he got the permanent job largely because of McGriff’s recruiting prowess. McGriff and his players talked ad nauseam in the preseason about finally being comfortable in the defense should allow the Rebels to eliminate the mental mistakes, play faster and offer more resistance.

Yet Ole Miss has allowed 1,115 yards of offense and 6 yards per play to an offense that played most of last week’s game with a freshman quarterback and another with an inferior level of talent.

Now Alabama comes to town next Saturday with many of the same players still around that hung 66 points on the Rebels in that nine-touchdown throttling a season ago. Auburn, LSU, Texas A&M, South Carolina and Mississippi State are still on the schedule, too. If Texas Tech and Southern Illinois can put up those kind of numbers, what’s going to keep all of them from doing the same thing?

It’s on Luke, McGriff and the rest of Ole Miss’ defensive coaches to find an answer. Because this defense isn’t inspiring any confidence that it’s better than what it’s been in recent years, and there’s not much time to turn it around.