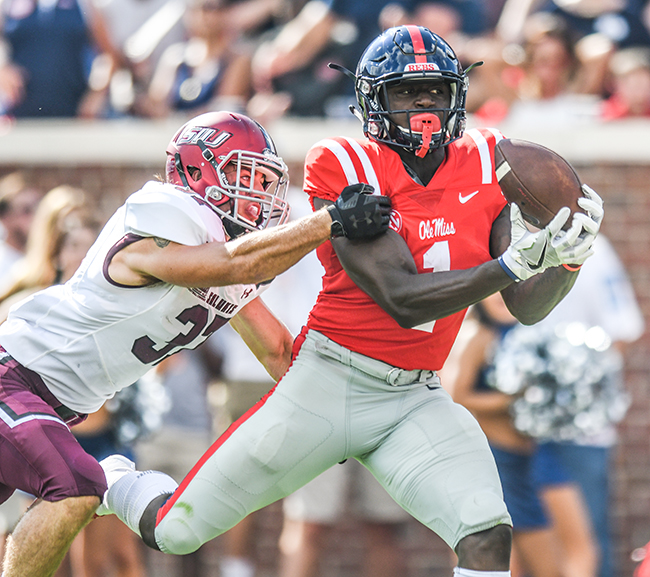 There were flashbacks of 2010 and Jacksonville State through most of the Saturday’s game. Fortunately the Ole Miss defense showed up in the final quarter and put to bed any fears of a repeat outcome from eight years ago.

Ole Miss outscored Southern Illinois 41-3 in the second half, defeating the Salukis 76-41 in the Rebels’ home-opener at Vaught-Hemingway Stadium.

Two key defensive plays in the fourth quarter proved the difference. The first coming from Vernon Dasher with an 88-yard pick six on the first play of the final quarter. The second back-breaking play for Southern Illinois (1-1) came when Victor Evans recovered a fumble for a 44-yard scoop-and-score touchdown to give Ole Miss (2-0) a 28-point advantage.

In the first three quarters it was an offensive explosion with both teams combining for 1,275 total yards and 14 touchdowns.

Jordan Ta’amu had a monster day, throwing for career bests of five touchdowns and 448 yards. Scottie Phillips followed up his 204-yard debut last week against Texas Tech with 107 yards and two touchdowns on 15 carries.

A.J. Brown had a game-high 158 yards off eight catches and two touchdowns. It is the junior’s seventh career 100-yard game, passing Laquon Treadwell’s six games for most in program history.

The defense held Southern Illinois to a field goal in the second half, but the first half was a different story. The Salukis piled up 386 yards and five touchdowns in the first two quarters and took a 38-35 lead into halftime.

Southern Illinois scored five touchdowns on their first six possessions of the game, the sixth drive ended in a field goal. They did not punt until their first drive of the second half.