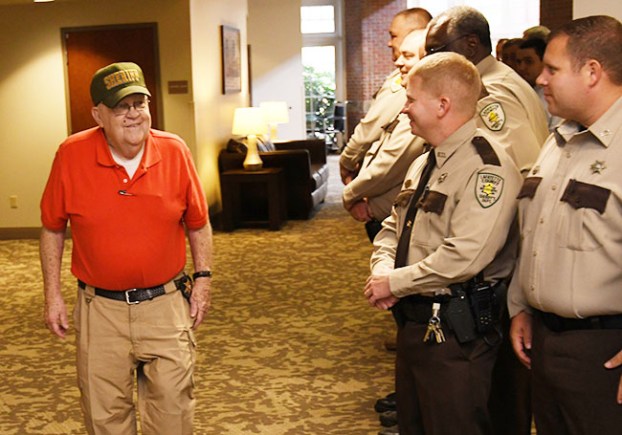 Flags in the LOU community will be flown at half-mast this week to honor a man many described as a “legend” in Mississippi law enforcement.

East was 76 years old and had recently celebrated 46 years serving the county as sheriff, having been elected for 12 consecutive terms dating back to 1972. He was the longest-serving sheriff in the state of Mississippi.

“This is what I always wanted to do all my life, to be sheriff,” East said to the EAGLE in a report about his 46 years of service. “It’s been a dream come true.”

Oxford Mayor Robyn Tannehill described East in a tweet as “a public servant who defined what true service looked like, a wise counselor, dear friend, a man who has left his mark on every corner of our community.”

“Words cannot describe the impact and legacy left on Lafayette County and the entire law enforcement community in the state of Mississippi over (East’s) 46 years of honorable service,” a statement from LCSD said.

Prior to his first term as Lafayette County Sheriff in 1972, East served as the Assistant Chief of Police for the Oxford Police Department. He was recognized as the Oxford Citizen of the Year in 1991, along with other countless awards, certificates, honorable titles and medals he received over the years.

East was awarded the Silver Star for Bravery from the American Law Enforcement Association and, most recently in 2015, was honored by The Lafayette County Law Enforcement and Officers Association with the Medal of Valor and Unselfishness in the Face of Danger.

He served two terms as President of the Mississippi Sheriff’s Association from 1989 to 1990 and 1999 to 2000 and was a member of New Prospect Baptist Church.

After receiving news of East’s passing, Governor Phil Bryant took to Twitter to express his condolences as a public official and former law enforcement officer.

“I am so sorry to hear of the passing of Sheriff Buddy East,” Bryant said. “As a former deputy sheriff, I have long appreciated Buddy being the longest-serving sheriff in Mississippi. He now walks the streets of Glory.”

The funeral service will be Friday, Sept. 14, 2018, at 11 a.m. at North Oxford Baptist Church with Reverend Randy Bain and Reverend Fish Robinson officiating.  Burial will follow in Shiloh Cemetery. Visitation will be Thursday, Sept. 13, 2018, from 2 until 8 p.m. at North Oxford Baptist Church, and again prior to the service beginning at 10 a.m. at the church. Waller Funeral Home is in charge of arrangements.

Prior to his passing, East named John Hill as chief deputy. Hill has currently assumed the role of sheriff, and the Lafayette County Board of Supervisors will meet Wednesday to officially appoint an interim sheriff.