McGriff: Lack of focus, not scheme, the reason for slow start against SIU 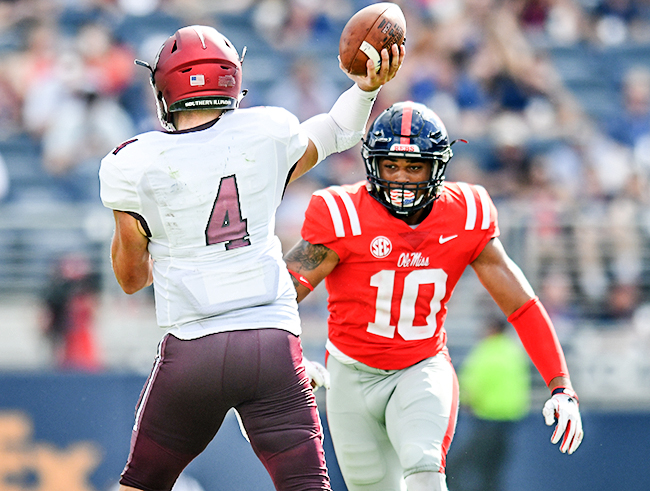 The answers remained the same on Monday as they did after Saturday’s game.

At Ole Miss’ weekly press conference, head coach Matt Luke and defensive coordinator Wesley McGriff echoed what they said after Saturday the Rebels’ win over Southern Illinois. The first half performance by the Rebel defense was not a scheme issue, but a focus issue.

That issue is something which must be addressed before No. 1 Alabama rolls into town this Saturday (6 p.m., ESPN).

The Salukis racked up 386 yards of total offense and five touchdowns in the first half last Saturday. In the second half, Southern Illinois had 243 yards but were held to a field goal in the third quarter. The Ole Miss defense had only three tackles for a loss and one sack in the game.

“Looking at the defense it obvious it was a tale of two halves,” Luke said. “Same calls against the same plays. We executed in the second half, the first half we didn’t. So, I think that goes back to me having the guys ready to play right from the start. …from a schematic standpoint, everybody was asking me that, it was more about execution and going out and playing the game. The same play they had a guy wide open was the same play we were intercepting in the second half.”

There were a lot of new names out wide for Ole Miss’ offense on Saturday and nearly every one of them contributed in a big way.

The biggest was sophomore Braylon Sanders who got the start with DaMarkus Lodge not cleared from the concussion protocol. Sanders had four catches for 133 yards and a touchdown. Freshman Elijah Moore had his first career catch and touchdown against Southern Illinois late in the game and senior Alex Weber had a catch for 31-yards.

“That’s the fun part, to see the work ethic really paying off,” Luke said of his receivers. “Seeing Braylon take advantage of the opportunity not only in the last game, but the first game. He’s starting to be consistent and really show up and making the tough catches. It was fun to see Elijah get his first touchdown and a guy like Alex Weber who’s really worked hard and been here a long time be the No. 1 play on Sportscenter on his first-ever catch. It’s not just talent. Those push each other really, really hard.”

Luke noted on Monday that Lodge was still going to through the concussion protocol but was showing positive progression and listed as probable for Saturday.

Sophomore defensive end Tariqious Tisdale is also going through the concussion protocol and is listed day-to-day and Luke hoped to know more on Tisdale’s status on Wednesday. Linebacker Kevontae’ Ruggs is progressing towards being cleared after suffering a concussion in the Texas Tech game, which saw him sit out against Southern Illinois. Ruggs is currently listed as probable for Alabama.