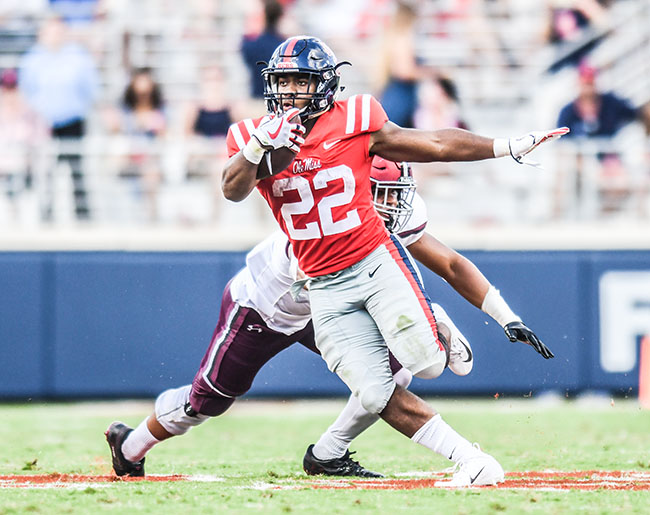 Ole Miss’ offense has been one of the best in the country through the first two weeks of the season. This Saturday will be their first opportunity to show how good it really is.

The Rebels host No. 1 Alabama this week in what is a matchup of one of the Southeastern Conference’s top offenses versus one of its best defenses.

After two games, Ole Miss (2-0) has the sixth best offense in Division-I and the second best in the SEC. They piled up nearly 1,200 yards against Texas Tech and Southern Illinois’ defense and averaged 596 yards per game.

A lot of that has to do with a balanced attack led by running back Scottie Phillips. The junior has 311 rushing yards and four touchdowns in his first two games as a Rebel.

“I pictured myself having this kind of season,” Phillips said. “With all the hard work I put in during the spring, this is what I pictured in my head. (Alabama) is always a good team. I’ve been preparing well for them. I’ll be ready for them on Saturday. I embrace the challenge of facing that defense.”

Before Phillips gets his shot at Alabama’s defensive front, the Rebel’s offensive line will have to find a way to continue making large holes for Phillips. Ole Miss is ranked eighth in the SEC in rushing offense with 188.5 yards per game, due to the way the offensive line has managed to improve their play over recent seasons.

On the other side is a Crimson Tide rushing defense that is also ranked eighth in the conference, but is holding opponents to 94.5 yards per game.

After holding Louisville to 16 yards on the ground in their season opener, Alabama struggled to slow down Arkansas State. The Red Wolves rushed for 173 yards in their 57-7 loss to Alabama.

Chip on their shoulder
Last year’s game against Alabama was Dawson Knox’s first career start. It was not a game to be remembered for the Ole Miss tight end.

Knox finished the night with two catches for 28 yards. Wide receiver A.J. Brown finished with one catch for six yards on a night where the offense did not record a touchdown.

Ole Miss’ offense has not forgotten their performance in Tuscaloosa last year.

“It was obviously a tough game to get my career going,” Knox said. “(Alabama is) obviously a great team. I’ve never been beat like that before in my life and I think there’s a lot of guys on this team like that. So, I think we’re going to have a little extra for them.”

Injury update
After suffering a concussion against Texa Tech and sitting out against Southern Illinois, Kevontae’ Ruggs is full go for Alabama. The freshman linebacker was cleared from the concussion protocol and returned to practice on Tuesday.

Luke also noted wide receiver DaMarkus Lodge was back in practice in a non-contact green jersey and offensive lineman Ben Brown was cleared to return to practice on Thursday. Brown is listed as probable for Saturday.