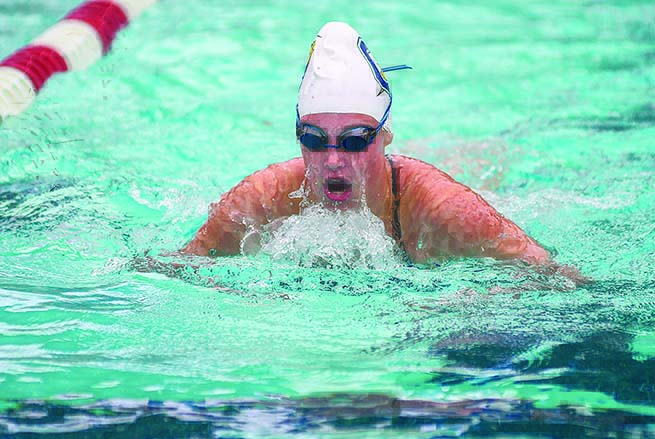 Oxford head coach Robert Gonzalez knew he had a deep team on the girls’ side, but he was unsure how long it would take for that potential to come through this season.

This week he got his answer.

For the first time in eight years, the Lady Chargers defeated Tupelo in the pool, winning the girls’ title at the Oxford Invitational. The only home meet of the season for Oxford was held at the Oxford City Pool on Tuesday.

“We did a good job of being able to field multiple kids, scoring kids, pretty much in every single event across the board,” Gonzalez said. “I thought that was really important, for us to be able have basically every swimmer on the team add and contribute to the point standings. …I really thought our kids tried to make a statement. When you lose to a team in every meet for eight consecutive years, it’s a milestone to get over that hurdle and I look forward to see if that springboards them and really motivates them for the remaining part of the season.”

The Lady Chargers had 12 Top-3 finishes during Tuesday’s meet, including individual and relay events. Of those 12, three were first-place finishes.

The team of Chiniche, Catherine Field, Hanna Harper and Kate Byars won the 200-yard freestyle relay with a time of 1 minute, 48.67 seconds.
Chiniche was the anchor for Oxford, finishing behind Dennis in the in the 50-yard freestyle. Her split times in the 200- and 400-yard freestyle evens were first and second, respectively.

“(Chiniche) has been on the team as long as anybody else and I was really, really impressed with her 100 freestyle. Great, great race,” Gonzalez said. “She’s never had a comeback in that event before. She was down at the 50 and she was just nitty and gritty and able to overcome that deficit on the back 50.”

Oxford swept the podium in the girls’ 50-yard freestyle with Field finishing behind Dennis and Ciniche.

The team of Chiniche, Dennis, Maxwell and Byars finished second in the 400-yard freestyle relay with a time of 3:58.47.

The boys’ team finished second behind Tupelo. The Chargers earned 87 points while the Golden Wave picked up 186. Hernando (58), Starkville (54) and Cleveland Central (35) rounded out the Top-5.

The boys’ team picked up eight Top-3 finishes, one of them being first-place.

Will Carrington won the boys’ 100-yard butterfly with a time of 59.95 seconds.

“I was happy with the boys,” Gonzalez said. “The bottom line is we just don’t have the depth on the boys’ side. I’ve said that from the very beginning, but the quality of the swimmers we have is still very, very good. The fact we have zero boy seniors we look forward to have that group kind of gel this year, and I just look at that team always growing and getting better for years to come.”

The top results for the Lady Commodores were a pair of ninth-place finishes in the 200- and 500-yard freestyle by Collyn Lewis and Murphy Smith, respectively.

On the boys’ side, Tennessee Lund had the top result, just missing the podium with a fourth place finish in the 50-yard freestyle.

What Nick Saban said ahead of Ole Miss –…