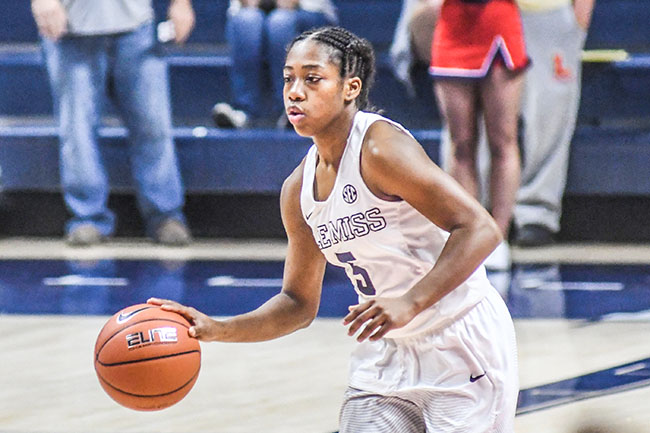 Ole Miss' Erika Sisk (5) vs. Jacksonville State at the Pavilion at Ole Miss in Oxford, Miss. on Thursday, November 17, 2016.

The playing career of Erika Sisk is far from over and ‘The Mayor’ is going international.

The former Oxford and Ole Miss women’s basketball star has signed a contract to play for Petrolina AEK Larnaca B.C., a professional basketball team based in Lanarca, Cyprus. The club competes in the Cypriot Basketball League.

She will leave for Cyprus, a small island located off the coast of Greece, on Saturday and stay there for the duration of the seven-month season. When Sisk went to bed on Monday night she was unsigned. That changed come Tuesday morning.

“I was called at three o’clock Tuesday morning and told they had me a contract and a plane ticket,” Sisk said. “When I posted it on Facebook it got a lot of likes. It felt good to see my Oxford community still supporting me and have my back and proud of me.”

Sisk is the next in a long line of former Ole Miss players who have gotten the chance to play in the professional, or semi-professional ranks.

She joins Abbeville natives Jennifer and Peggie Gillom on that list.

Sisk was a standout player at Oxford and a four-year starter during the 2009-12 seasons. She helped the Lady Chargers go undefeated (33-0) and win a state championship her senior year.

From there she signed with Murray State and stayed for one season before transferring back home to Ole Miss. While with the Rebels, Sisk became the team’s 27th player to join the 1,000-point club. She is ranked No. 5 all-time at Ole Miss with 254 career steals.

After graduating, Sisk turned to coaching and helped with the Oxford Middle School girls’ team last season. It was rewarding to help pass the game of basketball down to the youth of Oxford, but Sisk still had the itch to play.

“When I left Ole Miss I wanted to become a coach. I knew that,” Sisk said. “I wanted to stay for a year and just get some coaching. I knew I needed something on my resume, so I did that. …It was tough because I wanted to be out there (playing). But, I loved giving the knowledge to (the players).”

After she wraps up her first season in Cyprus, Sisk will come back to Oxford for five months and continue to host her annual basketball camp. It is her choice to return and play each season and has a goal of playing basketball well into her 30s if the opportunities continue to presents themselves.