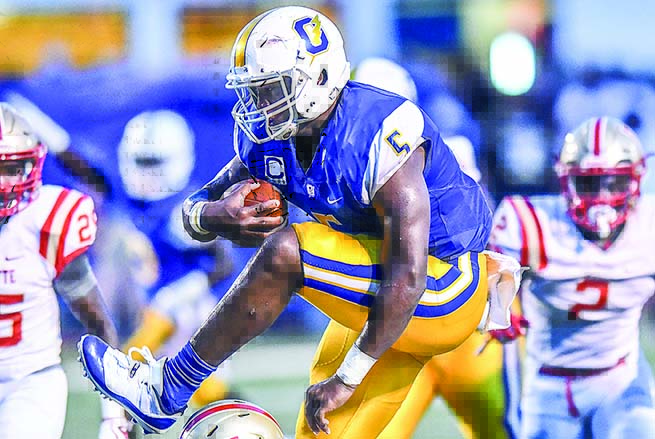 Oxford is on cloud nine.

Riding a two-game win streak and defeating a crosstown rival will do that for a team. Coming off their 29-27 win over Lafayette last Friday, the Chargers are hoping the momentum can carry them into their final non-region game and beyond.

Since the Starkville game, the Chargers (2-1) shutout Grenada and handed the Commodores their first loss of the season. Over the past two weeks there have been steady improvements for the team.

“From the Starkville game we had way, way too many turnovers, offensively, and that’s something we’ve improved upon,” Oxford head coach Chris Cutcliffe said. “We had one last week, but it’s still a focus of ours to have no turnovers each time we take the field. I think we continue to improve tackling, defensively. That’s something we have to continue to build on and work on.”

For the second straight season, Oxford opted to not have break in their schedule with a bye week. In both seasons they filled that open date with a game against Pontotoc. The Chargers and Warriors will meet at Pontotoc on Friday (7 p.m. 95.5 FM).

Last season, the Chargers hosted Pontotoc and defeated them 17-0 in the first meeting between the two teams since 2004. Like this season, the Warriors were undefeated entering the game with Oxford.

This year, things are a bit different with Pontotoc (4-0) sitting atop the Class 4A Associated Press rankings and just outside the overall Top-10 poll. The Warriors are coming off a 48-8 win over Aberdeen and have had an easy time with all four of their opponents this year.

Pontotoc’s closest game was a 23-14 win over Senatobia on Aug. 24. Oxford will cap the Warriors’ five-game home stand to begin the season.

“(Pontotoc) has talented backs and their quarterback is a playmaker. He’s a good decision-maker with the ball and I think across the board they are physical and have some guys that can run and make plays,” Cutcliffe said. “They don’t make very many mistakes on offense, defense or special teams. They’re not going to misalign. They’re not going to bust assignments or bust plays. They’re very, very well coached. They’re not a team to beat themselves.”

The Warriors’ offense is led by senior quarterback Justin Carter, but is balanced by a ground attack from senior running back Gabe Harmon.

Carter has thrown for 763 yards and six touchdowns with an interception mixed in. Harmon has 427 yards, six touchdowns and three games of at least 100-yards rushing.