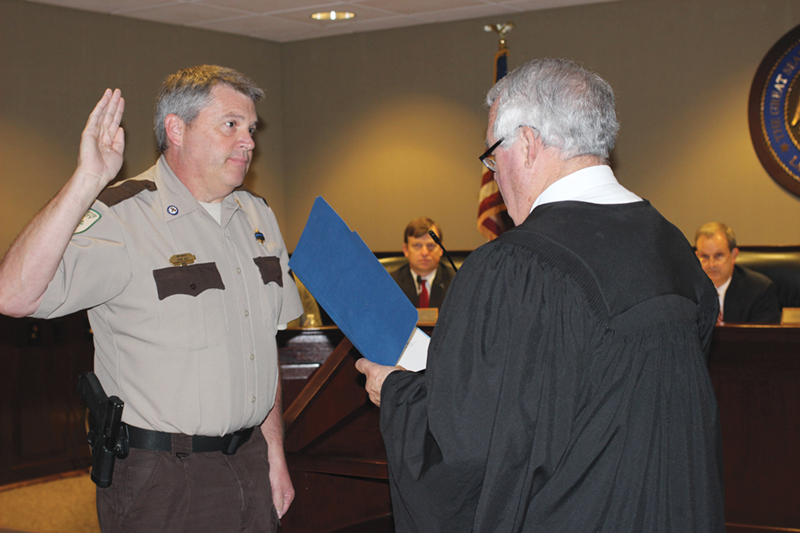 One of the late Lafayette County Sheriff F.D. “Buddy” East’s last acts in office was naming John Hill as his Chief Deputy.

Hill was officially sworn in as the interim Lafayette County Sheriff during a special meeting of the Lafayette County Board of Supervisors on Wednesday morning. Emotions ran high for county officials this week, as the meeting opened with a moment of silence and prayer to honor not only East, but also Maranda Tutor Anderson, wife of county fire coordinator Wes Anderson who passed away Sept. 9.

Board president Jeff Busby addressed the crowded boardroom, highlighting what East meant to him in his own life as well as the many others he influenced over the years. On paper, East was the sheriff, but to those in the LOU community he was a mentor, a father figure and above all, a family man, Busby said.

“(East’s) shoes will never be filled. He’s a legend throughout this state, throughout this country, and he’s going to be sorely missed,” Busby said. “We do have to move forward, and as I’ve talked with this board, talked with many of the deputies and family members… Buddy made this last decision several months ago. That day he knew, in their line of duty, he could walk out of that office and something could happen.”

The Board of Supervisors voted unanimously to appoint Hill as interim sheriff. Hill will serve until the term ends in December 2019, at which time he can choose to take part in the election.

“I, John Hill, do solemnly swear… that I will faithfully discharge the duties of the office in which I’m about to enter, so help me, God,” Hill said as he took the oath.