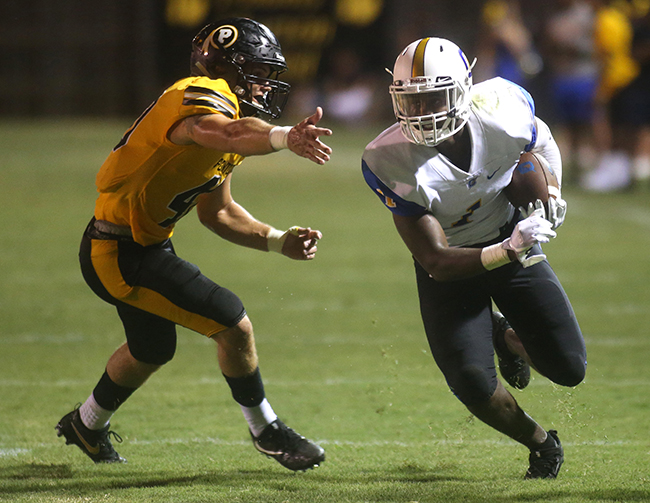 Oxford High's Dede Pegues runs after catching a pass against Potototoc at The Hollow in Pontotoc, Miss. on Friday, September 14, 2018.

PONTOTOC — At the end of the night, turnovers made the difference for the Oxford Chargers.

Oxford finishes their non-region slate with three straight wins and await a trip to Southaven next week.

“We are now 0-0,” OHS head coach Chris Cutcliffe said. “That is what I just told the team. This is where the real season starts. Now we know that everything counts, so we have to be ready to roll.”

Oxford forced five turnovers, two on muffed punts, and capitalized throughout the night. They also cashed in on an onside kick to begin the second half.

“Our coaching staff did a great job,” Cutcliffe said. “That gave us a lot of different stuff, some funky formations and our guys made great adjustments and handled it pretty well.”

Travien Sims led the Chargers in tackles with eight. Kiyon Williams, Kylin Dukes and Scott Norphlet each had six tackles.

Norphlet also added an interception in the first half off of a fake Warrior punt.

Offensively, J.J. Pegues found the end zone four times, three on the ground and one through the air with under a minute left in the first half. That score gave the Chargers a 14-6 cushion going into halftime. Pegues ended the game with 10 carries for 57 yards, as well as six catches and 37 yards. All of which lead the team.

“JJ is a very versatile guy,” Cutcliffe said. He does a lot of different things. He can split out and play receiver and some wildcat quarterback. He is such a smart player and is really big on our team.”

Quarterback John Meagher completed 17 of 25 passes and threw for 122 yards and a score.

Last week’s hero for the Chargers, Jack Tannehill, also got points on the board with a 42-yard field goal late in the fourth quarter.