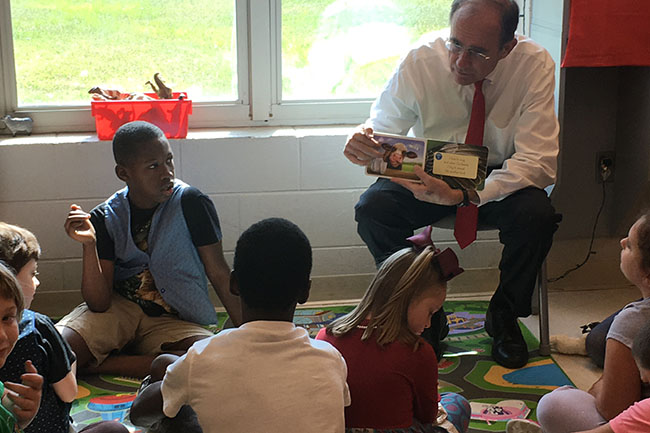 Mississippi Secretary of State Delbert Hosemann made the rounds at Lafayette Upper Elementary School on Thursday as part of the statewide Promote the Vote campaign.

Promote the Vote is a comprehensive kindergarten through 12th grade voter and civic engagement program sponsored by the Secretary of State’s Office and Mississippi Public Broadcasting and founded by Hosemann’s predecessor, Eric Clark. The campaign’s 2018 theme is “Make a Difference in Mississippi.”

“We’re working with young men and women to get them into the cycle of looking at voting. We’re also asking them to talk to their parents,” Hosemann said. “I want them to ask their mom and dad, ‘Who are you voting for? Why are you voting for him or her?’ and make sure they vote on election day.”

Hosemann visited Mississippi Teacher of the Year Whitney Drewery’s class, where he read a book to students, helped them assemble LovePacks and even joined in on an educational dance party. The Secretary of State said he is also writing a letter of recommendation for Drewrey in the hope she will be named National Teacher of the Year.

Children who participate in the Promote the Vote program will be able to participate in a realistic mock election, as well as art and essay contests with cash prizes, a trip to Jackson for awards recognition and a tour of the Civil Rights Museum. For the first year in the program’s lifetime, it is partnering with Mississippi Public Broadcasting’s education arm to bring the program to schools.

“It’s the national (legislative) elections, and they’ll have the same ballot that their parents have,” Hosemann said. “They’ll get their ballot and vote for the (legislators), and that’s important. The become accustomed to voting and, hopefully, they’ll vote forever.”

Hosemann said he views the program as particularly important in this political climate, because turnout in elections has been fairly low. Statewide, during the primary, approximately 13 percent of citizens cast a ballot.

By asking students to start a dialogue with their parents about voting and civic engagement, Hosemann said voter turnout would hopefully increase.

“Voting is a right so many people have fought to have, but it’s also an obligation,” he said. “Our hope is to make students talk to their moms and dads, and have that dialogue about what it means to be in a country where we’re able to cast a ballot.”

The Secretary of State’s office will continue to travel to schools across the state this month, before turning its attention to parents, Hosemann said. To learn more about Promote the Vote, visit www.sos.ms.gov/PTV.