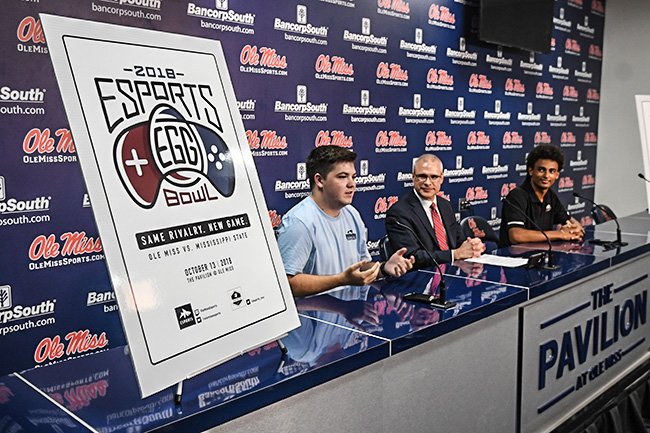 The Egg Bowl has been played between Ole Miss and Mississippi State since 1901 and the rivalry is entering the 21st center, technologically speaking.

On Thursday the Ole Miss and Mississippi State eSports clubs announced in a joint press conference at The Pavilion the eSports Egg Bowl. The inaugural event is sponsored by CSpire and will take place at The Pavilion on Oct. 13. It is free to the public and will be streamed online.

eSports, which has seen a rise in popularity over the past decade, involves groups of gamers who compete in team-oriented video games on either console or computer platforms.

“We’re hoping this garners support for eSports with both schools,” Ole Miss eSports club president Cray Pennison said. “eSports is something that’s kind of taken the West Coast by storm and a lot of companies and a lot of schools have pushed a lot of awesome stuff over there. It’s just now reaching here to the southeast and we want to be sort of the first to, not only do it here, but who does it the best.”

The Ole Miss eSports club formed in Jan. 2017 but did not fully take off until earlier this year. The university put its support firmly behind the club by allowing them to host such an event at the home of the Rebels’ basketball teams.

The Bulldogs group started around six years ago but much like Ole Miss, Mississippi State did not put their full weight behind the group until this year when they made them an officially sanctioned club sport.

These decisions helped the inaugural eSports Egg Bowl come to fruition much faster than either club anticipated.

“This was more like a dream event that we hoped to have within the next five years. Not this October,” Pennison said. “For some reason several people just started helping out, getting on board with this project. It kind of just blew up into this really amazing event that we’re going to have planned. I’m really looking forward to it.”

Games that spectators can expect to see played include Call of Duty, Overwatch, Rocket League, Rainbow Six: Siege and League of Legends.

Each team will field between 35-50 players and play on Craddock Court with fans able to watch the action on the jumbotron and other screens that will be set up.

The hope is to make this a yearly event, much like the Egg Bowl played on the football field, and allow both campuses to alternate hosting.

“Mississippi State has expressed their want for it to become an annual event just like we do the Egg Bowl,” Mississippi State eSports club president Jason DeShong said. “They want this to be an every year thing that heightens our rivalry and brings more attention to eSports in the southeast.”

Doors will open at 10 a.m. and the competition will begin at noon and last until the completion of all the games.