Ole Miss not concerned with past results against No. 1 Alabama 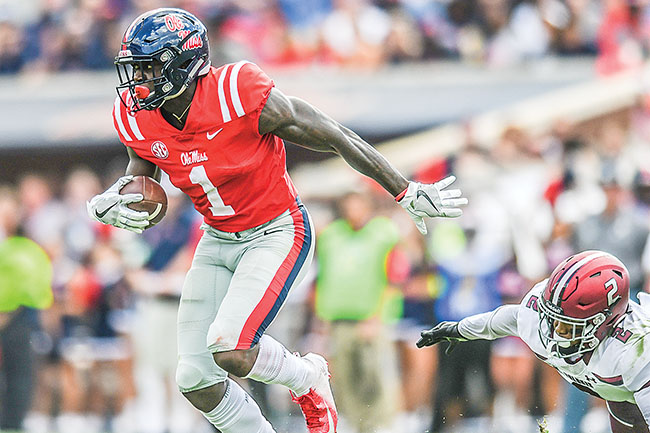 Matt Luke does not care what has transpired in recent games against No. 1 Alabama.

Since 2014 Ole Miss is 2-2 against the Crimson. The Rebels won in 2014 and 2015 and Alabama has taken the past two contests. Last season was a 66-3 pummeling inside Bryant-Denny Stadium.

When the two teams meet up on Saturday, the past will be left in the past.

“I’ve given that a lot of thought, but none of those have any bearing,” Luke said. “Different players, different teams, we have to focus on this year with the guys in our room playing against that team. I don’t think any of the previous years matter. It’s all about this year.”

It may be a new year, but most of the players on Ole Miss’ roster were in Tuscaloosa last September and remember what happened. Alabama (2-0) jumped on the Rebels early and they never recovered. One of the nation’s top offenses failed to score a touchdown.

Dawson Knox remembers the game vividly. The junior tight end made his first career start and has a better idea of what to expect in his second time going against the Alabama defense.

“They’re obviously a great team. We’re going to come out and give them everything we have,” Knox said. “I think there’s always going to be a way for (tight ends) to get involved in the game plan. They do play a style of defense that will allow us to have some more opportunities.”

For Luke, it is his second chance at Alabama as a head coach. He was an assistant on Hugh Freeze’s staff during the previous two wins. His first time matching strategy with Nick Saban did not go according to plan. The game against California was Luke’s first test as head coach last season but the Alabama game is the one that is remembered most.

Still, Luke is not putting any stock in what has already transpired.

“It’s their team from 2018 against our team from 2018,” Luke said. “I think that’s the way you have to look at it. You can obviously draw from the experiences when it comes to the tactical decisions and what they’ve done on defense versus what we’ve done on offense. So, you can draw from that experience but as far as the players and the scores I think you have to focus on this year.”

The Rebels are coming off wins over Texas Tech and their first-half shootout victory over Southern Illinois last week. With the scare the Salukis gave them, the focus that had been lacking in the first two quarters on Saturday returned to the practice field this week.

This week is Luke’s opportunity to steal a signature win in his first season without the interim tag attached to his name.