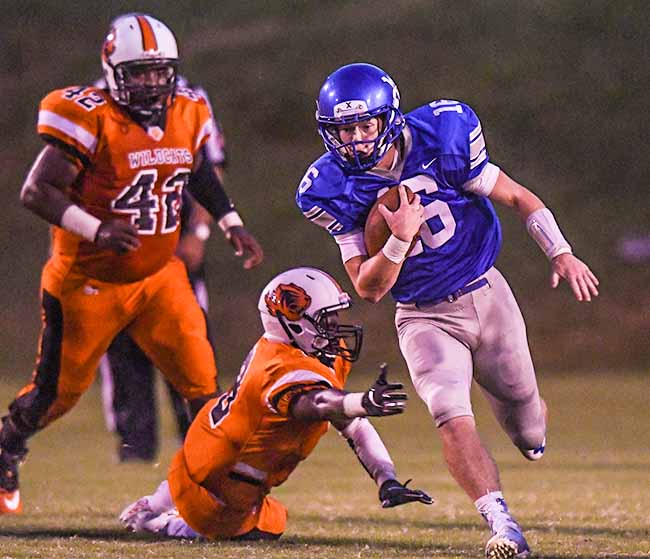 WATER VALLEY — Even with positive results through the first four weeks of the season, Water Valley head coach Brad Embry still had questions about his team.

On Friday, Embry got some answers in the Blue Devils’ 14-13 win over Calhoun City.

With the win, the Blue Devils improved to 5-0, giving them their best start to a season since 2013 when they began the year 6-0.

The first four games of the season have been cakewalks for Water Valley, with games well in hand by halftime. Embry knew his team would eventually have a game that would require a four-quarter effort and Calhoun City (2-3) provided it.

Tay Rucker and Jacob Truss combined for 200 rushing yards and two touchdowns. The passing game struggled for the Blue Devils with Blayne Clark going 3-of-9 for 43 yards and an interception. Truss went 0-for-2.

Water Valley finally got on the scoreboard in the second quarter with a 3-yard run by Rucker to tie the game at 7-all. Rucker followed that up with a 35-yard run the following possession to put the Blue Devils up for good.

“(Calhoun City) is really good on defense and getting better on offense,” Embry said. “That showed. We’ve been scoring 40 points by half and we scored 14.”

The Wildcats struck first on the opening drive of the game. Running back Anfernee Cambell scored on a 4-yard run for the only offensive touchdown of the game for Calhoun City. They punted on every possession following.

The only mistake by Water Valley’s offense led to the only other points Calhoun City would score. After Rucker fumbled the ball after a lengthy run, the Wildcat defense returned it 75-yards for a scoop-and-score late in the first half. What became the deciding play of the game was a failed two-point try following the fumble return to keep the Wildcats at 13 points.

Water Valley stays home next week to host another 5-0 team in Winona.